Growth returns to telco NI market; momentum shifts to cloud, away from Huawei

Enough vendors have now reported their 2Q21 results to allow for some preliminary conclusions about the market. As of August 10, we have compiled earnings figures and analyzed customer segmentation for 72 vendors, including Huawei. These 72 account for roughly 3/4 of the market based on historic revenue trends.

Focusing on vendors’ sales to the telco vertical, what MTNC refers to as “telco network infrastructure” or telco NI, revenues climbed 2% YoY in 2Q21.

That’s slower than the 8.7% YoY growth rate recorded by this subset of vendors in 1Q21. However, the 1Q21 surge was influenced by a weak base period (1Q20), when economies were dragged down by COVID’s early spread. On a six month basis, telco NI revenues in 1H21 grew 5.1% YoY. Annualized (12 month) telco NI revenues through 2Q21 grew 2.8% over the 2Q20 figure. These growth rates may be modest in other parts of the tech sector, but for telco NI they are an improvement.

As Figure 1 shows, Huawei has tracked very differently from the overall market: outperforming in 1H20 due to Chinese 5G spending, and lagging in the last two quarters as supply chain restrictions and security concerns caught up to the company.

Figure 1: YoY change in annualized sales to telcos: Huawei vs. all others (preliminary) 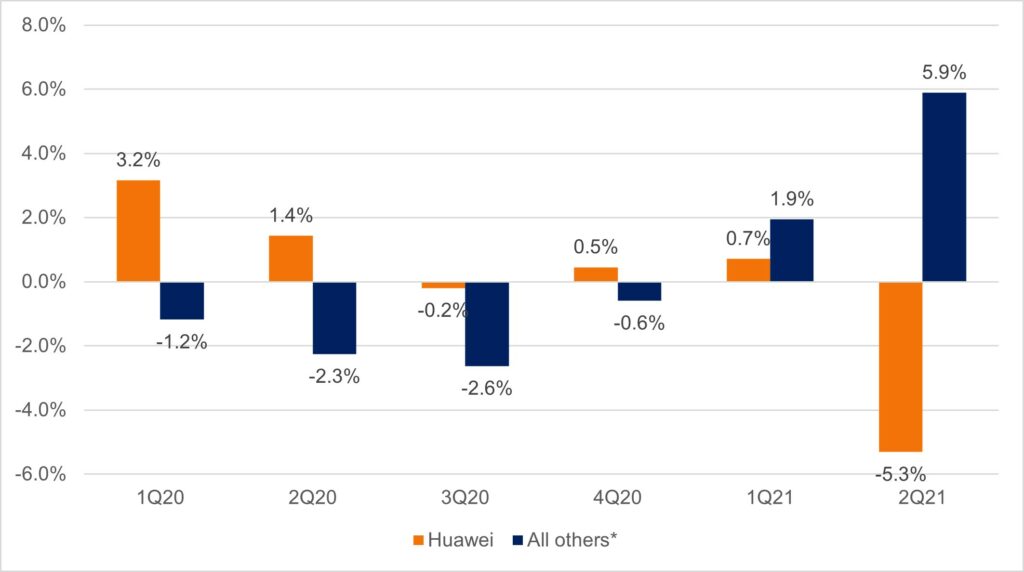 This growth is welcome news for the many vendors with strong positions in the telco sector. Moreover, the growth comes despite Huawei’s 7% decline in first half telco NI revenues. As the market’s (still) largest vendor, this 7% drop has a big impact on the overall market. Removing Huawei’s figures from our calculations, for 2Q21 alone preliminary telco NI vendor revenues grew by 11% on a YoY basis.

Among reporting vendors, the best 2Q21 results in terms of YoY change in telco NI revenues (on a USD basis) came from Ericsson, Nokia, Samsung, Microsoft and Capgemini. Ericsson and Nokia are benefiting from uptake of 5G worldwide and picking up some of Huawei’s old business. Samsung’s improvement is due both to its Verizon 5G deal and to making strides in smaller 5G markets like Canada and New Zealand. Microsoft’s result is due to a long list of telco collaborations, as well as two 2020 acquisitions (Affirmed and Metaswitch). Capgemini’s growth is due largely to acquiring Altran, an engineering services business with strong telco roots. As far as YoY drops in telco NI revenues in 2Q21, the only significant one among companies reporting to date is Huawei: we estimate its 2Q21 revenues at $12.2B, down from $14.4B in 2Q20.

Moving back to a more long-term comparison, Figure 2 illustrates the biggest swings in annualized telco NI revenues for 2Q21 (versus 2Q20 annualized).

As Figure 2 makes clear, Microsoft (shown as “Azure”) is not the only cloud provider making progress in the telco sector. AWS also recorded an impressive bump in annualized telco NI revenues in 2Q21, just a bit behind Microsoft. GCP is not in the top 10 but its 2Q21 annualized telco NI revenues measured $129M, double the 3Q19-2Q20 figure. Combined, the three companies accounted for approximately $1.9B in annualized sales to telcos in 2Q21, from $970M a year earlier. That puts the three companies’ collective telco NI market share a bit ahead of Juniper Networks. Increasingly these webscale-based cloud providers are competing against vendors with a much longer track record in the telco industry: Amdocs, Cisco, Nokia, etc. AT&T’s recent deal with Microsoft will accelerate this competition as it entices more telcos to consider outsourcing and collaborating with the cloud.

The Huawei dip in 1H21 is not unexpected. We wrote earlier this year that Chinese telco NI vendors would likely lose $4B of revenues in 2021 due to supply chain restrictions and security concerns. What we predicted is largely coming true:

“US policy will continue to restrict much of the Chinese technology sector’s access to US supply chains; the US government will aim to minimize deployment of Chinese technology in both US communications networks and those in allied countries; and, US policy will support alternative technologies and companies that can help smooth the transition away from China. Implications: Huawei will see market share in the telecom sector decline markedly over the next 2 years; China will push harder on its own allies to purchase Huawei/ZTE gear; Huawei and ZTE will emphasize services and software more, and hardware less; China will explore many ways around the rules but see limited success without crucial chipmaking technology; Open RAN will see an accelerated adoption curve; US companies like Ciena, Cisco, and Infinera, and others (e.g. Fujitsu and NEC), will see telecom opportunities pick up significantly in 2H21 and 2022.”

In recent earnings reports and calls, many vendors are pointing to the recent Huawei weakness as one driver for improved results; for instance:

As Nokia’s discrete wording suggests, discussing Huawei publicly can still be tricky for top execs. Many of these companies rely on China for various parts of their supply chain, or as an end use market. Ericsson’s decision to go after Chinese business more aggressively than Nokia has put it in a tough spot. Chinese officials are explicitly linking Sweden’s ban on Huawei in 5G with Chinese telco procurement decisions. This is a good reminder that China’s telcos are not private entities, and that Huawei’s fate is extremely important to Chinese politicians.

As noted, this short note is based upon roughly 75% of the market reporting. A number of significant vendors have not yet published 2Q21 earnings. The largest of these, by far, are Cisco and ZTE. We will publish final results and commentary on the 2Q21 telco NI market in September.