Europe’s largest cell tower specialist, Cellnex, is creating a joint venture with DT in the Netherlands for the two parties’ tower assets. DT’s contribution is its 3,150 Dutch towers while Cellnex adds another 984. The combined entity will be known as Cellnex Netherlands BV, or Cellnex NL. T-Mobile Netherlands will have access to Cellnex NL’s sites through a long-term lease-back arrangement.

Small deal with a twist

This is a small deal, relative to Cellnex’s size. Cellnex ended 3Q20 with 50,185 tower sites under its management, and is in the process of acquiring 24,500 European towers from CK Hutchison. However, there is a twist that makes the deal more significant. Cellnex and DT are also creating a new, independently managed fund called “Digital Infrastructure Vehicle” (DIV), whose aim is to invest in fiber networks, cell towers, and data centers across Europe.

DIV’s initial owners are Cellnex and DT, with exact ownership stakes unclear from public reports. DIV will be led by the DT side: Vicente Vento, co-founder of Deutsche Telekom Capital Partners. DIV is likely to pursue third party investments to help it grow, most likely through acquisition of existing properties across Europe. DT’s CEO Tim Hottges says that DIV’s goal is to “identify and promote exceptional digital infrastructure projects in partnership with Europe’s leading telecommunications group and the leading tower company”, and that is has an existing pipeline of projects under consideration.

At MTN Consulting, we classify Cellnex as a carrier-neutral network operator (CNNO), specialized in owning and selling access to network assets on a neutral basis to multiple service providers. Most CNNOs specialize in either towers, fiber, or data center assets. However, over the years there has been some blending across the infrastructure types, especially towers and fiber. Most of that has been via acquisition, as for example Crown Castle’s $7.1B acquisition of Lightower in 2017. Tower companies have also been branching into small cell development through organic investments, and building fiber out to the small cell and between their tower assets. Some data center specialists have also invested in high-capacity fiber routes linking their facilities, for instance Equinix.

The Cellnex deal with DT raises questions about what extent CNNOs should own assets across the tower/fiber/data center boundaries. The traditional CNNO business model is to function similar to a real estate holding company. CNNOs spend most of their capex on property investments, not network equipment. They generally function as wholesalers of simple network services (e.g. space on a tower, a colocation cage, dark fiber) to other providers who have their own end user customer base. Telcos are going through massive adjustments, though, looking to raise cash and simplify their own business models. That may involve spinning off more of their passive network assets, and also creating investment vehicles like DIV to attempt to profit from the growth of this adjacent market.

Our forecast for CNNO expansion: capex and M&A equally important

As explained in our recently published network operator capex forecast, MTN Consulting expects the CNNO sector to grow its asset base over the next several years as it has historically: through a blend of high capex and acquisition of both small existing CNNOs and assets from other sectors. 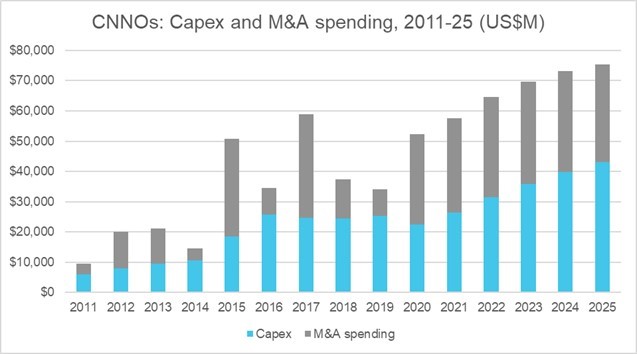 We expect capital intensity to come in at the relatively low rate of 30% in 2020, rising gradually to 40% by 2025 as CNNOs find fewer big M&A opportunities for expansion. M&A starts out high (40% of revenues in 2020) and scales back gradually to 30% of revenues by 2025. In reality, both data series will be much choppier this, especially M&A because of the nature of big deals.

As a result of all this investment, we expect the asset base of all segments within CNNO to grow considerably:

The Cellnex-DT deal makes clear that some CNNOs are eager to own assets across these three segments.

Specializing in just one type of infrastructure will continue to be preferred by a number of large CNNOs.

On January 13, a week before the Cellnex-DT deal, Telefonica announced a sale of most of its tower infrastructure to American Tower, for 7.7 billion Euros, in cash. Specifically, AT is acquiring the Latin American and European tower assets held by Telxius, an arms-length infrastructure affiliate of Telefonica. Telxius is 50.01% owned by Telefonica, 40% by KKR (a private equity group), and 9.99% by Pontegadea, the personal investment vehicle of founder of the Zara fashion group, Amancio Ortega. Notably, American Tower is not acquiring the submarine assets also owned by Telxius, for which Telefonica is seeking a separate buyer.

Cellnex was apparently in the running to acquire the Telefonica assets, but got outbid by American Tower. That may be a blessing in disguise considering Cellnex is already in the process of acquiring 24,500 towers from CK Hutchison in Europe.

Despite the name, American Tower is already a global provider. As of 3Q20, only 41,000 of its 181,000 wireless properties were in the US market. However, Europe only accounted for 3% of AT properties; the Telxius deal will raise that significantly, and help position AT as a rival to Cellnex, at least in Spain and Germany. AT already has a big Latin American presence, with over 40,000 towers there at 3Q20’s end. In total, AT is acquiring 30,722 towers from Telxius, adding over 17% to AT’s global tower count.

Cellnex’s new infrastructure JV with DT, the Digital Infrastructure Vehicle (DIV), represents a tower CNNO venturing into fiber and data centers, albeit indirectly. American Tower’s acquisition of Telxius towers represents a more traditional deal: a tower specialist getting bigger, expanding its share of multiple geographic markets. American Tower does have some fiber assets but in general the company has avoided expansion into other types of infrastructure.

AT’s preference has some support in the investment community. Elliot Management lobbied last summer against Crown Castle’s choice to spend so heavily on its fiber business, for instance. Similarly, a well known financial analyst in the tower space, Jonathan Lawrence with Pinpoint Capital Advisors, recently argued that “You don’t want to detract from your core tower business. New business offerings such as fiber or data centers, where we have started to see tower companies invest, take significant expertise and resources to manage effectively.”

MTN Consulting expects there to be more than one approach to this issue. There are some clear synergies to owning both towers and fiber assets, or data centers and fiber. The assets have to be priced right to make entry into the adjacent market worthwhile, first and foremost, as the CNNO market is a relatively low margin business.

From the telco side, Telefonica’s decision to sell Telxius assets reflects the parent company’s ongoing financial challenges. A weak top line is the starting point: Telefonica’s revenues have been on the decline since 2018 (figure, below). 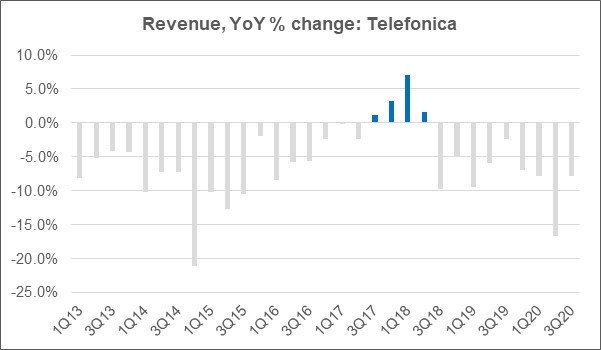 Telefonica ended 3Q20 with 52.5 Billion Euros in debt (financial liabilities), with only 5.9B of cash on hand. The fact that the 7.7B Euro deal with AT is all-cash is a big plus for the company. It may also help Telefonica justify a more liberal capex budget as it continues with 5G buildouts and participates in 5G-related spectrum auctions this year, including in the UK. For the first 9 months of 2020, Telefonica spent 4.1B on capex (excluding spectrum), from 5.2B in the same period in 2019.

It’s notable that Telefonica is among the most aggressive telcos in its embrace of open RAN and open networking in general. Telefonica has also been especially active in its collaboration with the webscale sector, establishing cloud partnerships with GCP (2020; 5G mobile edge computing), Azure (2019; service design), and AWS (2018; digital transformation). Eagerness to work with webscale operators and an open approach to network disaggregation are hallmarks of the more capex-constrained telcos.