As of April 28, 13 of the 138 telecom operators (telcos) we cover in our quarterly tracker have reported 1Q21 earnings. Revenues for the early reporters have been surprisingly strong: all but 2 of the 13 have reported YoY revenue growth rates greater than the 4Q20 vs. 4Q19 result. This comes with a big caveat, however. Nearly all of the 13 owe their relative success to growth in equipment or device revenues, not to their core operations/services. For instance, 1Q21 device revenues climbed by 218% and 45% for China Telecom and AT&T, respectively. Not surprisingly, revenues for key handset suppliers are surging: Apple’s iPhone product revenues grew by 17.1% YoY in 1Q21 to $65.6B, while Samsung mobile device revenues were up 13.0% YoY in 1Q21 to 25.82 trillion Won (~$23.2B). Huawei is down but that is a company-specific situation, and early signs are that other Chinese handset suppliers (e.g. Oppo, Vivo, Xiaomi) did quite well in 1Q21.

On the network investment side, only 10 of the 13 reported capex for 1Q21, as the three Chinese companies in the group report capex only every 6 months. MTN Consulting expects telco capex to grow roughly 4% in 2021, but there is no obvious pattern of growth yet based on these 10 telcos’ reports. Du and Tele2 reported 52%, and 36% YoY growth, respectively, but most of the larger telcos in the group of 10 reported YoY capex declines. Orange was an exception, as it reported 3.1% YoY growth in capex for the first quarter, due both to fiber builds in rural France and international markets as to 5G.

As the figure below illustrates, total revenues increased on a YoY basis in 1Q21 for 8 of the 13 companies reporting to date. That’s promising given that 2020 revenues for the global telecom market declined by about 1%. Further, there were a number of significant improvements in growth between 4Q20 and 1Q21, for instance China Unicom’s acceleration from 6.9% YoY growth to 11.4%. Growth flipped from negative to positive for Verizon, AT&T and Rogers. One factor is a pickup in economic activity in many global markets as COVID-19 vaccines started their rollout and government stimulus programs took effect. The more important factor is the 4G to 5G transition. 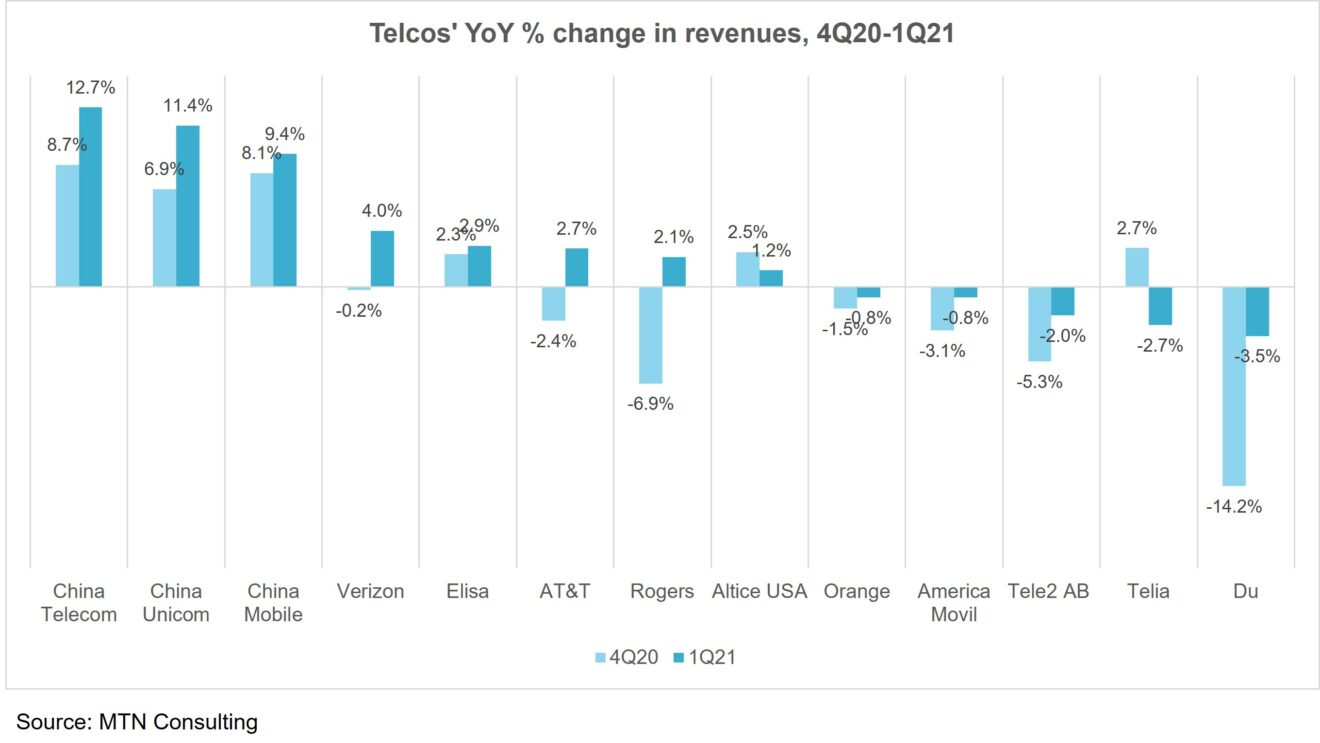 Most of the telcos reporting above operate in markets where that transition has already started: China, USA, Finland, Canada, France, Sweden, and the UAE. America Movil is an exception, as 5G is still emerging in most of its markets. Altice USA is the other exception as its mobile business is tiny and based on an MVNO with T-Mobile. For all others, though, device/equipment revenues related to 5G were the primary driver behind the YoY improvement in 1Q21 revenues:

In their earnings, not all telcos addressed how much of their growth was attributable to one-time handset purchases that are mostly flow-through revenues. China Mobile was more direct, saying its 67% revenue growth in the sales of “products and others” was due to the the “buoyant growth of handset sales as 5G handsets were available with more varieties and at more affordable prices in the terminal market.”

Ten of the 13 telcos reporting have published capex figures for 1Q21. As the figure below shows, half reported YoY growth, half showed declines. 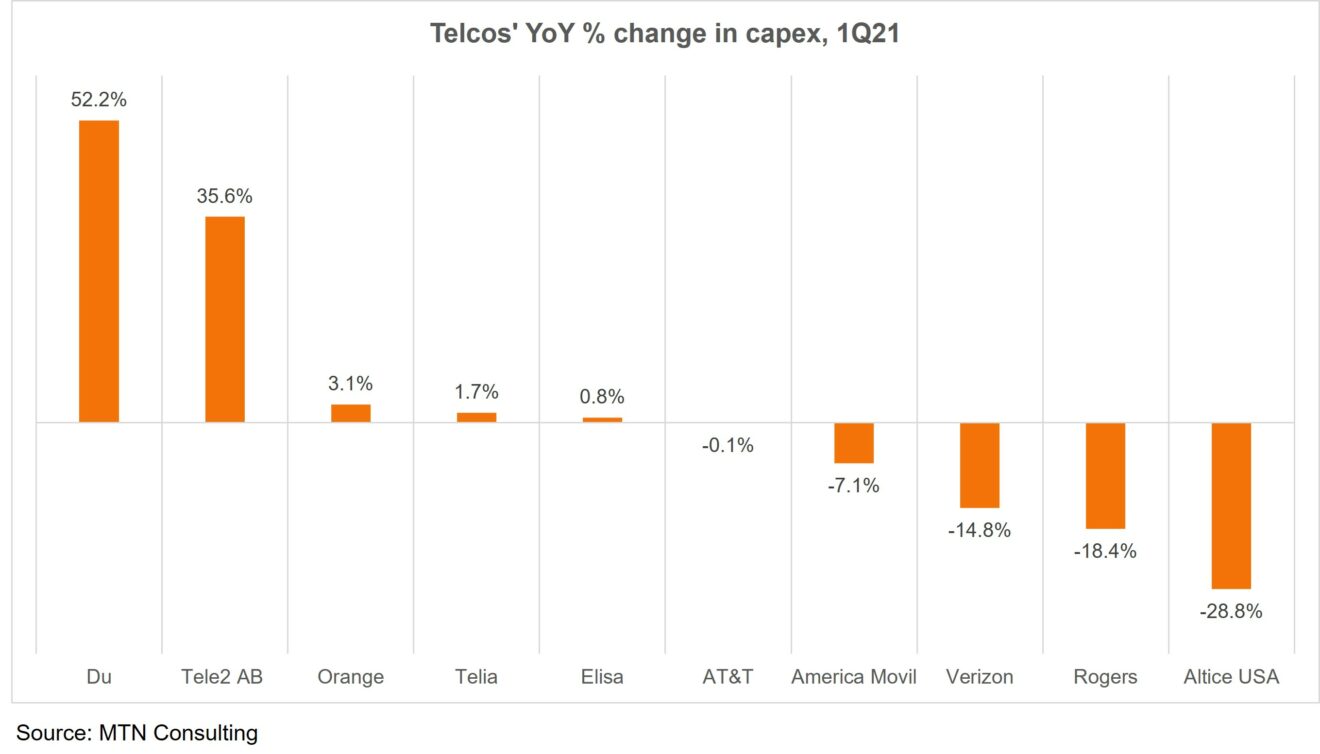 For all but Altice, the 5G transition plays into the capex fluctuations of all these telcos – with the cost of spectrum an issue that often arises.

Du’s 52% growth in 1Q21 is due to capex spend “mainly on the core network as well as 5G roll-out and on improving mobile coverage and capacity.” Tele2 cites its rollout of nationwide 5G in Sweden, and Remote-PHY on the fixed side. Orange’s modest growth is due to a ramp-up in its core France market aimed at getting Paris ready for its March 5G launch, as well as growing fiber investments in both rural France and overseas markets like Poland. Telia’s slight increase reflects a decline in fiber investments in Sweden offset by rising 5G costs as it builds out the network based on newly secured spectrum in both Sweden and Denmark. Elisa’s ~1% YoY increase is due to 4G capacity increases and expansion of its 5G coverage to reach 2.5 million people in Finland.

Among the capex decliners, America Movil’s dip is due in part to caution surrounding regional currency fluctuation and its December 2020 joint acquisition (with Telefonica and TIM) of Oi’s Brazil business. Moreover, America Movil is determined to implement 5G with minimum effect on capex: its CEO noted on AM’s 1Q21 earnings call that “I don’t think even for this year or for the next years, we [are] going to have an increase — substantial increase of CapEx for 5G.” Altice USA’s 29% dip is due mainly to a huge decline in CPE purchases, which flow into capex for Altice (as for most cable companies). Rogers also reduced capex in 1Q21, perhaps distracted by its huge pending acquisition of Shaw. Going forward, Rogers has committed publicly to major new investments in the network, in particular in rural and lower-income markets.

The two largest companies in the group of 10, by far, are AT&T and Verizon. Their capex outlays in 1Q21 were on the conservative side, falling 15% for Verizon and staying flat for AT&T (including its vendor financing payments). Their capital deployment focus in recent months has been spectrum: in the last two months, AT&T and Verizon have made payments of and $23 billion and $45 billion for C-Band spectrum, respectively, to the US FCC.

Both companies have a long way to go to build out nationwide 5G coverage and now face an energized T-Mobile post its acquisition of Sprint. That makes their recent splurges on new C-Band spectrum all the more notable. The high cost may cause some pullbacks on capex, or at least a more eager approach to partnerships that may reduce capex, for instance webscale collaborations (e.g. AT&T-Microsoft cloud connectivity, and Verizon-AWS 5G MEC).

Clearly AT&T and Verizon need to buy equipment and software to turn this new spectrum into a usable resource, but the high cost does constrain them on the capex side. Verizon addressed this indirectly in its earnings call, saying that it is “delighted that the credit rating agencies consider the spectrum asset purchases as strategic and critical to our business operations and held their rating levels unchanged.” It’s true that spectrum is a strategic asset, but the same can be said for fiber and data center and other types of infrastructure that compete for capital within a telco budget. Costly spectrum will continue to be an issue impacting US telcos. To the extent all US telcos face this reality, the main effect will be to slow deployments in lower ARPU areas and increase consumer prices, but also encourage adoption of products & architectures which aim to maximize use of scarce spectrum resources.

Who will capture 5G’s value?

Telcos deploying 5G are clearly seeing a revenue uptick related to sales of 5G-capable devices. This also happened with 4G. Looking back, device and app companies captured much of the revenue upside related to deployment of 4G networks. This is a risk with 5G as well. As telcos deploy stand-alone 5G networks and rollout some of the more sophisticated functionality that comes with 5G, they will need to stay focused on deploying new services that deliver them growth. That will not be easy, and will require collaboration with both their vendors and the adjacent webscale sector of operators.