Two weeks ago, we provided a preliminary view on revenue trends based on the first 13 significant telcos to report 1Q21 earnings. In it, we noted that revenue growth rates appeared promising for 11 of these 13, as the YoY % change in 1Q21 was improved relative to 4Q20. However, we also flagged a trend of concern, namely, that much of the apparent telco revenue growth was coming from sales of equipment (e.g. handsets) rather than core services. This has been happening on the mobile side with new 5G device sales, and also with cable companies catering to the work from home crowd. A survey of 25 additional telcos which have reported since our last newsletter confirms this trend. Telcos are still not persuading investors that the new services they are investing heavily to develop will lead to significant top-line growth.

The figure below illustrates the difference in the YoY revenue growth rate achieved for the group of 25, comparing 1Q21/1Q20 to 4Q20/4Q19. As shown, 18 of the 25 improved their YoY revenue trend line at least a bit between 4Q20 and 1Q21. 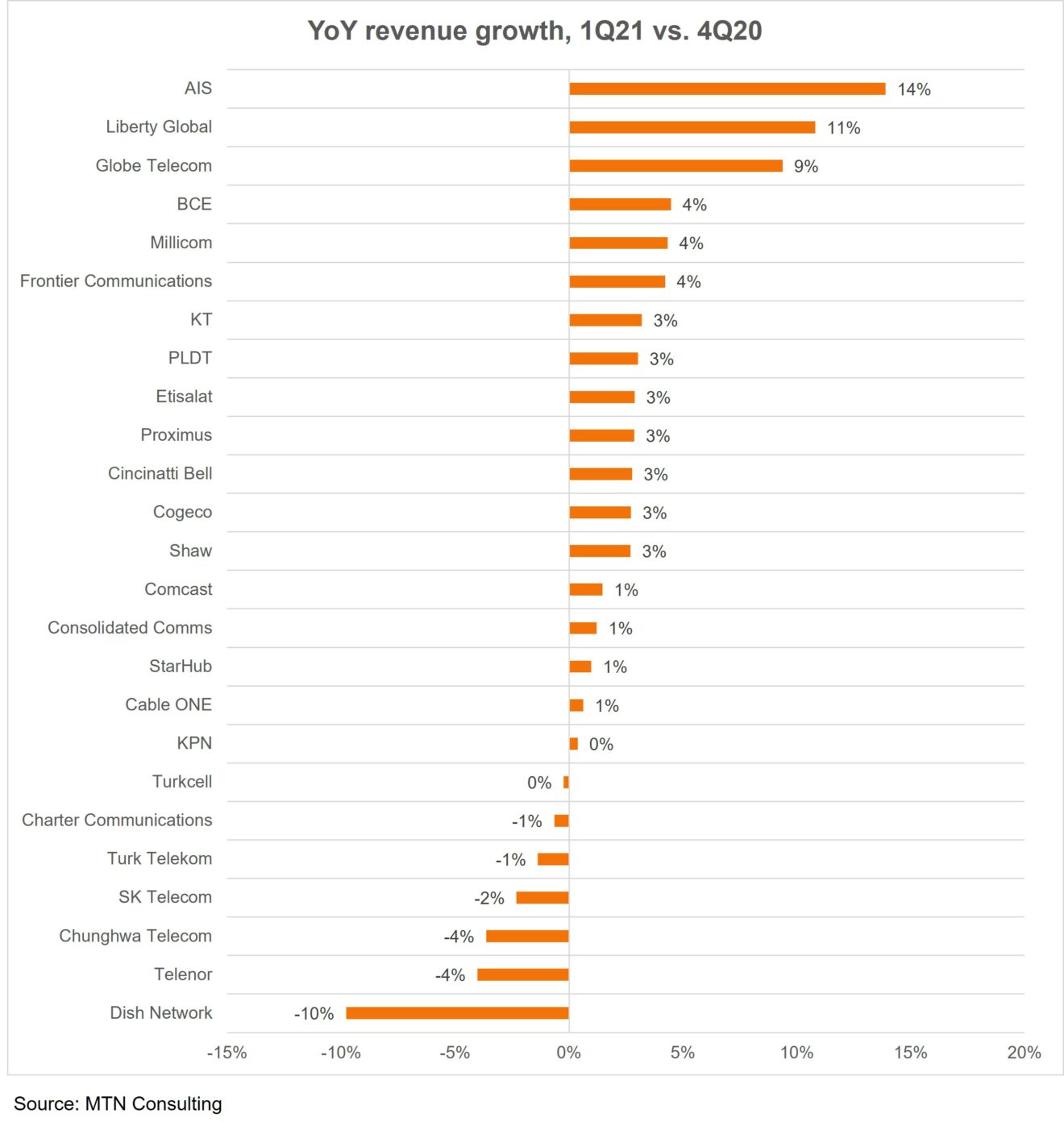 Thailand’s biggest telco, AIS, had the best result of the 25 due to aggressive investments in both 5G and consumer fiber broadband completed in 2020. Its 4Q20 revenues declined by 7% YoY, while 1Q21 revenues grew by 7%, netting a positive 14%. Liberty Global grew by double digits as well, but that’s almost entirely due to recent acquisitions (of Sunrise, and Vodafone properties).

The worst performer of the group was Dish Network, but this is misleading as the company is ramping up a new service so growth rates will inevitably decline over time. Telenor had the second worst result of the group, for more substantive reasons: its Myanmar operations have collapsed amidst political unrest, and its Thailand arm DTAC is running behind rivals True and AIS in 5G rollouts. To compensate, DTAC is now accelerating a 5G rollout based on 700MHz spectrum, and Telenor is attempting to gain scale in another regional market, Malaysia, by merging its local operations with Axiata. At the corporate level, Telenor continues its long-running efforts to optimize its operational cost base: it claims a 7% company-wide decline in opex for 1Q21.

The table below provides a summary of total revenue growth in 1Q21 for a subset of the 25, and the growth reported in non-service (equipment) revenues for the same time period. As shown below, equipment revenue growth outpaced the total company trend line for nearly every telco, in some cases by huge margins (e.g. Dish, AIS, Global Telecom, Etisalat). SKT was the only exception, as its corporate revenues climbed by 7.4% in 1Q21, while the non-consolidated “others” category of sales (which includes handsets) grew by just 3.8%. Not unrelatedly, SKT is planning to spin off part of its operations in the near future, in particular the parts growing faster than its telco core. 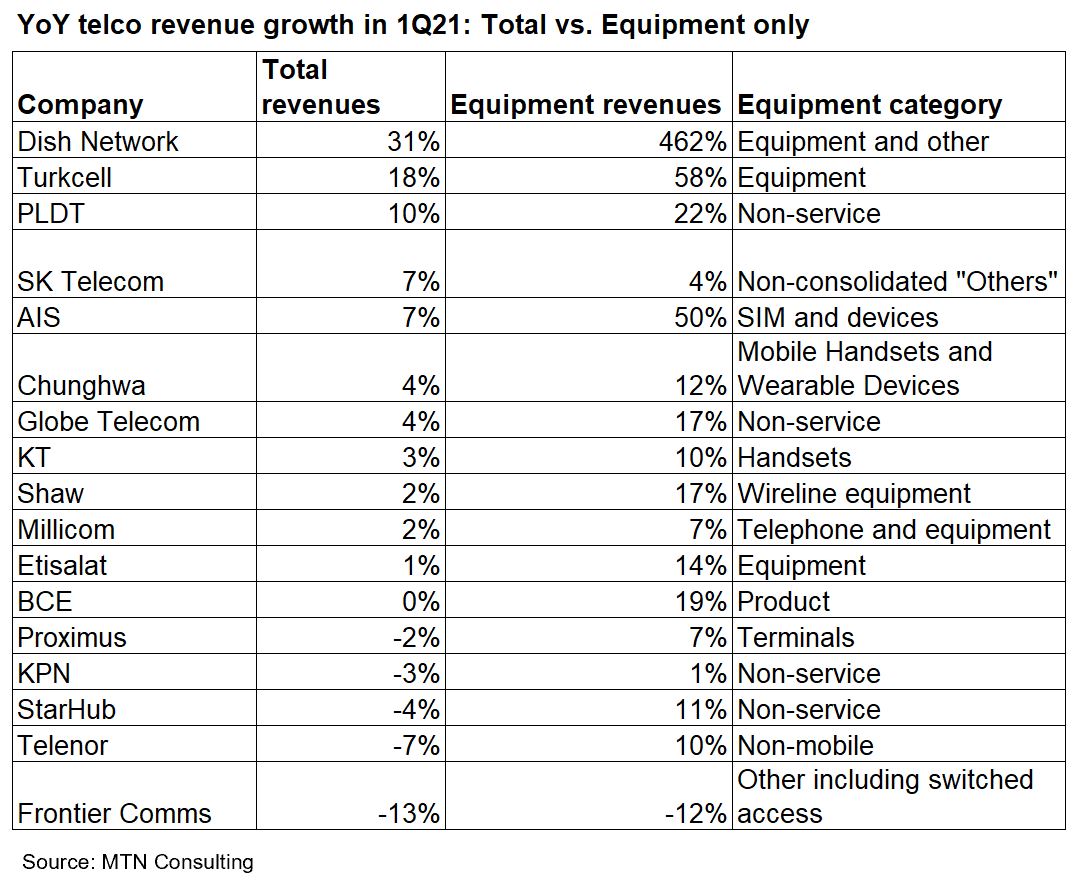 Only 17 of the 25 are included above because the rest do not report equipment revenues, as they (generally) lease CPE to customers and capitalize the gear onto their balance sheets. That’s true for Cable ONE, Charter, Cincinnati Bell, Cogeco, Comcast, Consolidated, and Liberty Global; the 8th of this group is Turk Telekom, which does not publish its non-service (equipment) revenue figures for other reasons.

Capex trends – changes in capital intensity due to 5G, fiber, and transformation

Much of MTN Consulting’s research is concerned with network spending trends, so we track capex closely each quarter. We are projecting a slight uptick in telco capex (in US$) for 2021. Based on early stats for 1Q21, this scenario is still likely. There are a number of sizable companies reporting capital intensity (capex/revenue) ratios higher for 1Q21 than 1Q20, for instance. This alone is not a great benchmark, as some telcos were forced to cut back capex in 1Q20 as the COVID-19 pandemic began to spread. Nonetheless, telcos aren’t shying away from modest capex investments in their network in order to improve operational efficiency (e.g. digital transformation, automation) and support a new generation of services on new 5G networks and FTTH.

The table below presents single quarter capital intensity for 1Q21, the change from 1Q20, and the drivers for that change. Not all 25 telcos are shown below; this table includes only telcos which reported capital intensity either >2.0% higher or lower for 1Q21 than the prior year period, 1Q20. Companies are listed according to their relative in capital intensity across these two periods, high to low. 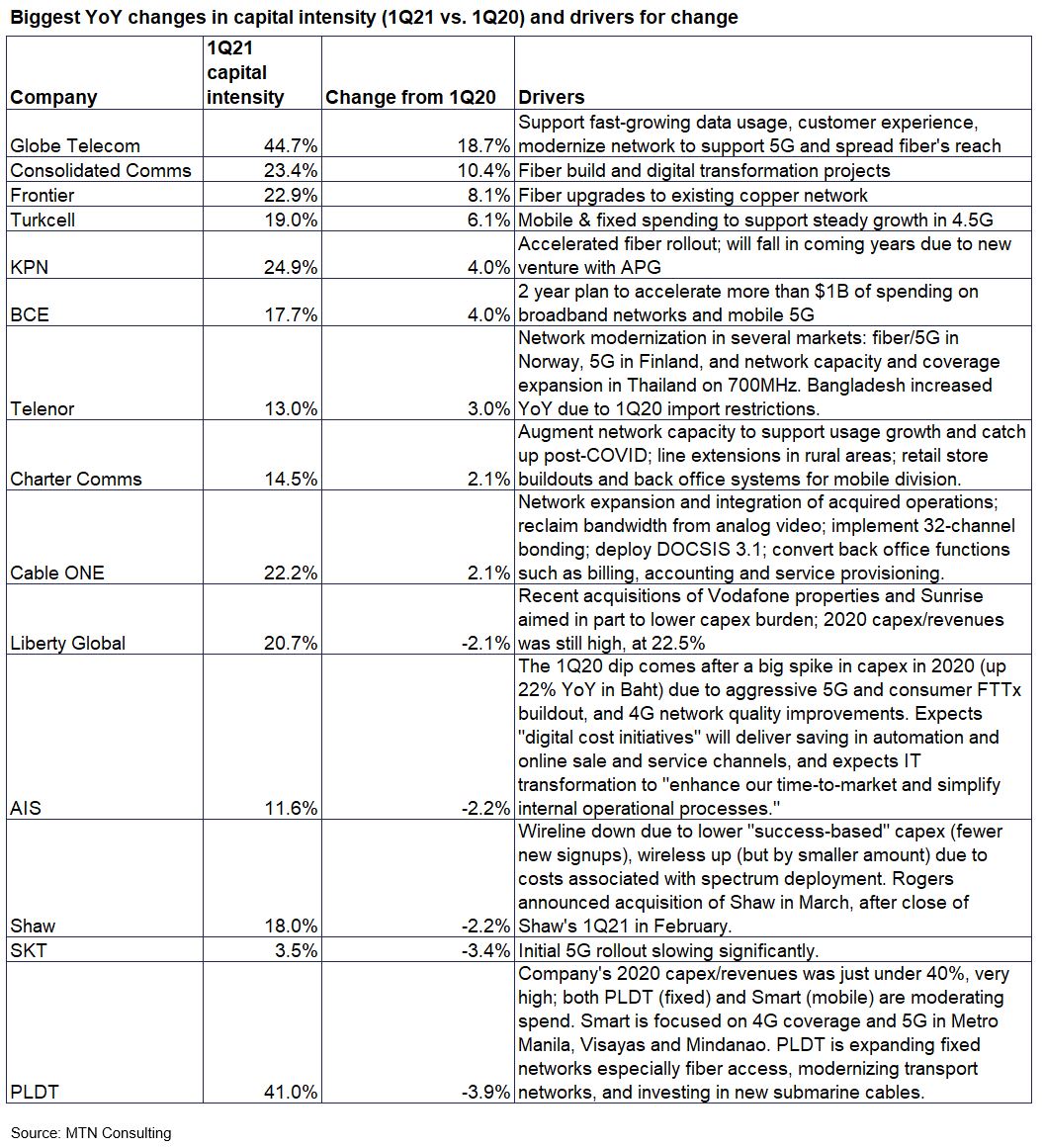 Who will capture 5G’s value?

As we noted in our last research, many telcos deploying 5G are seeing a revenue uptick related to sales of 5G-capable devices. This also happened with 4G. Looking back, device and app companies captured much of the revenue upside related to deployment of 4G networks. This is a risk with 5G as well. As telcos deploy stand-alone 5G networks and rollout some of the more sophisticated functionality that comes with 5G, they will need to stay focused on deploying new services that deliver them growth. That will not be easy, and will require collaboration with both their vendors and the adjacent webscale sector of operators.