Mobile tower infrastructure provider China Tower has won approval in Hong Kong for an IPO in what bodes to be the largest IPO in Hong Kong since 2010. Speculation is rife that the IPO could raise up to $10 billion for China Tower. That’s over twice the IPO of Chinese device maker Xiaomi which raised about $4.7 billion in its Hong Kong debut.

China Tower was established in 2015 as part of a government-mandated spin-off exercise. Following transfer of the ownership of the nation’s “Big Three” operators’ tower infrastructure, China Tower was valued then at US$36 billion. Each of China’s major mobile network operators (MNOs) now own a stake in China Tower and get quarterly dividends from their ownership stake in China Tower. The shareholding structure post the deal completion was as follows: China Mobile (38%), China Unicom (28.1%), China Telecom (27.9%) and China Reform Corporation (6%).

The government’s primary motive in creating China Tower was to bring greater efficiency into the sector, freeing up capital for the telcos to make higher value investments. Another key goal is to encourage China Tower to diversify into new service areas & end user markets.

China Tower is the largest tower infrastructure provider worldwide, with a portfolio of 1.9 million towers and 2.7 million tenants. Further, China Tower is buoyant as 4G remains a strong impetus behind mobile data consumption. This trend is reflected in its 2017 results (see Figure 1) as it recorded an operating margin of 11.2% compared to 9.1% in 2016; and its revenues were up 23% reaching CNY68.7 billion ($10.6 billion).

Despite the strong 2017 results, China Tower has some risks on the horizon.

The jump in leasing expenses has compelled the operators to renegotiate their tower rental agreements with China Tower.

Price negotiations aren’t easy for China Tower, since the big three operators are its customers as well as shareholders. The Feb 2018 tower leasing charges suggest that China Tower was too generous in its pricing to the operators. The tower company reduced the mark-up margin rate (a fee charged over and above the overhead costs) of its 5-year agreement from 15% to 10%. It also agreed to provide discounted rates for co-tenancies on towers. It agreed to offer a 30% discount (up from 20%) in its pricing if the site is shared by two operators; and up to 40% discount (up from 30%) for more than two operators. The lower rental fee agreements will have an impact on its profitability which can only be seen when the IPO is out.

5G networks in China are slated for commercial operation starting no later than 2020. In fact, China Mobile is on track to beat this, as it plans to launch 5G in 2019 itself by partnering with Viavi Solutions. According to Ericsson’s latest report, by 2023 China will add more than 300 million mobile data subscriptions, driving data traffic up to 18EB per month. This promises huge demand for large scale network build out which suggests more business for China Tower. 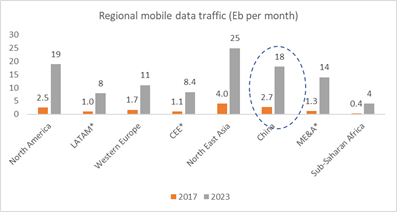 In the infant stage of commercial deployment, both 4G and 5G network will co-exist. Wireless networks need to improve their network density, though. Typically, 5G networks will operate on millimeter spectrum (3–5 GHz spectrum bands) which need higher frequency reuse, and this suggests more base stations to match the same level of 4G coverage.  For the MNOs, apart from improving the density of 5G macro cells they also need to utilize small cells and distributed antennae to supplement coverage. This promises huge growth potential for China Tower’s small cell business, which commenced operations in 2017. Moreover, China Tower already has 16,798 DAS sites and recorded exponential revenue growth since 2015, from CNY45 million ($6.7 million) in 2015 to CNY1,284 million ($192 million) in 2017. With the growing demand for wireless coverage inside buildings and tunnels, the future for this segment looks promising for China Tower – which currently contributes a meagre 2% to the revenue.

While China Tower gears up for its IPO, it remains cautious about timing: Hong Kong’s financial exchanges will be impacted from the ongoing trade tussle between China and the US. China’s telecom industry is already facing the heat due to tariffs imposed on Chinese imports to the US. This is a setback for the operators as this would mean increased equipment costs, resulting in a possible decline in their profitability. The after-effects to this will also be felt by China Tower, as the big three operators are its major shareholders. The growing trade war between China and the US will also lead to continuous market volatility (at least till the end of 2018) which will significantly impact the Hong Kong IPO market. This was already seen to some extent in Xiaomi’s IPO filing. Early this year, there were rumors that Xiaomi’s IPO would be valued at nothing less than $10 billion, but it managed to raise just about $4.7 billion. Nonetheless, it remains the biggest IPO since 2014.

China Tower will likely experience a daunting task ahead especially with the US-China trade war looming over Hong Kong stocks. And Trump’s recent move to block China Mobile from the US market on security grounds comes as another sign that the trade dispute between the nations will not end anytime soon.

September 29, 2017 Buying opportunities During the 2008-9 financial crisis, some wondered (including me) if... read more