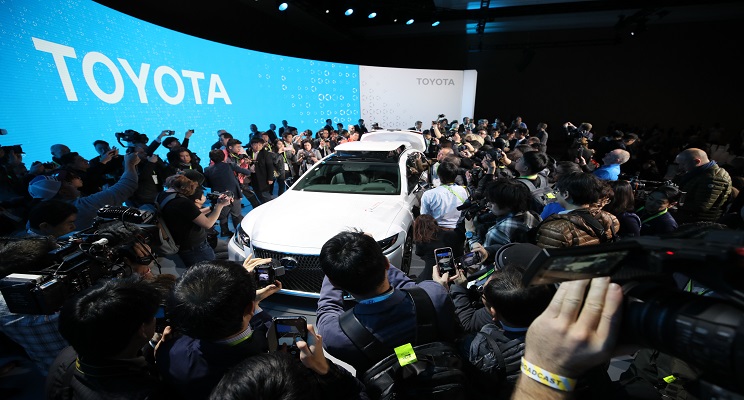 I’m one of those people who loves driving, but not picky about the actual car. I’ve driven some rusty, falling-apart junkers in my life, lots of forgettable rentals, and too many SUVs – I like driving them all. As long as I’m not stuck in traffic.

What I like less is, the idea of the car driving me. Even worse is the idea of no steering wheel at all, now a reality in some concept cars. Power-steering is a great innovation, true; ask anyone who has ever parallel parked in New York City. But gesture-based steering is another thing. Waving a hand (or wrinkling your nose?) in front of a built-in camera to tell the car to go left or right is a bit much. Even if the car is doing most of the steering, the user (this one, anyways) still wants to be in control. Especially when security and safety are such important considerations. The whole issue of hacking becomes even more frightening in a world of autonomous vehicles.

CES makes a self-driving future seem within (our kids’) reach

So, I’m probably an unlikely analyst to get excited about the self-driving car movement. But I am, especially after visiting CES last week.

Cars were a big part of the show, both on the floor and in conference sessions. Companies from across the (emerging) connected & autonomous vehicle (CAV) ecosystem showed up, from across the globe. There was loads of hype, and way more companies than can survive. But things are getting real.

Some interesting announcements specific to 5G network connectivity from the show include:

AT&T has been (justifiably) bragging about its connected car success, and that continued in Las Vegas. The company had 24 million connected car connections in Sept 2018, mostly through partnerships with manufacturers. It also has about 1 million consumer connections for car WiFi hotspots. Impressive numbers, but the network requirements are still fairly limited. AT&T’s VP for IoT Solutions, Joe Mosele noted on a CES panel that this will change. Networks will need very low end-to-end latency (<20ms) to make self-driving a reality. Some edge processing will be required to support this latency; that is one reason AT&T expects edge computing to be important, and why it supports the “central office rearchitected as a data center” (CORD).

It’s not just AT&T. The transition to connected & autonomous vehicles (CAVs) is going to have a big impact on the broader sector of telecommunications network operators (TNOs). New types of companies will see a need for communications network infrastructure, e.g. to support a CAV offering. New companies may find use for old/unused infrastructure or rights of way (e.g. power companies). Telcos will find ways to create things like “super bundles” by adding in monthly car service, and partner with or buy a shared transport provider like Uber or Lyft. Over time the roadway infrastructure itself will change to accommodate different types of vehicles. People who like to drive old cars that aren’t retrofitted with V2X gear may only be allowed in certain parts of a city. Cars will come in more shapes and sizes, have fewer windows, but more screens, cameras, sensors, storage, and networking capability. As the market scales, data consumed per vehicle will rise and use cases will get more complex. The “data center on wheels” term may come to fit. Telcos will have a big role to play.

After 20+ analyst years watching technologies come and go, usually far slower & chaotically than expected, I’m a bit of a cynic. Or a realist, anyways.

A full global transition to connected & autonomous vehicles will take 30-50 years or more, depending on how you define the end state. There will be huge regional variation, partly because of different regulatory regimes. Also important is the reality that CAVs can only function safely within a specified geographical space. Geofencing will be used to control – and slowly grow – the scope of CAV deployments. Autonomous tractors working together to manage large farms, for instance. Pepsi’s experimental snack delivery system, made by Robby Technologies, in use on the University of the Pacific campus in California. More ambitiously, Volvo aims to have a Level 4 robotaxi available in China by 2021, working with Baidu. This effort will be limited to specific areas too, though; the quality of the local maps are essential, not just the network. China’s rapidly changing streets and skyline makes the mapping issue even more demanding.

Telcos need an upside, and cars could help

Telcos have faced weak revenue growth for many years. Given this reality, they are focused on costs: building & managing network infrastructure, as efficiently as possible. With self-driving, though, there is some upside potential. As the autonomous car market evolves, we expect telcos to pursue a range of different approaches. Some will be pure pipe (or bandwidth) suppliers, some will partner selectively with automotive specialists (car makers, ride sharing, etc), some will transform their operations more dramatically to address self-driving. None will be unaffected.