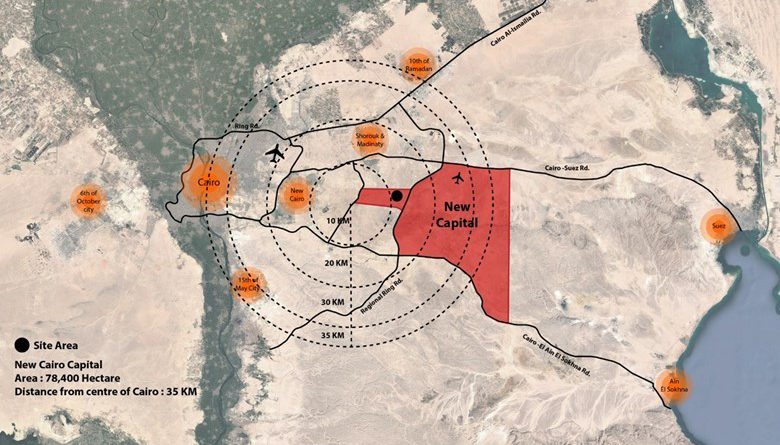 Egypt is building a new capital city on a desert plot between the Nile River & the Suez Canal, to ease Cairo’s population boom. Labeled “the first smart city in Egypt,” the new, unnamed city ultimately aims to house nearly 6.5 million people. Chinese bank loans are paying for 50-70% of upfront costs. Across the project’s two phases, total costs will reach US$45B. This is an ambitious project, and one of several “megaprojects” being pushed by President Sisi, with Chinese backing.

A loan is a loan

China isn’t actually paying for anything though. While Chinese bank loans may be big, they are still loans, and they come with strict terms. The new capital’s electric rail project is typical: Chinese banks are lending funds only to buy Chinese equipment; the Egyptian side needs to fund the remainder. Interest rates are rumored to be reasonable, around 2-3%, but repayment on the new capital loans begin in late 2019-early 2020, based on the 36-42 month grace period.

And three years grace period isn’t nearly as much as it sounds, with a project this big.  The country’s economy has bounced back since its Nov 2016 IMF bailout, but can’t afford an economic slowdown. Egypt’s portion of project costs are to be funded by selling land in the new capital to property developers.  It’s easy to imagine a worse case scenario for the government, where recession hits Egypt in 2019, property developers go bust in the new capital, relocation rates dwindle, and the government has trouble paying back China in 2020 and beyond. The implications of that are stark.

The “owner” of Egypt’s new capital is the Administrative Capital for Urban Development. ACUD is in charge of both initial construction and management. It has two shareholders: 51% is held by an affiliate of the Ministry of Housing, known as the New Urban Communities Authority (NUCA). The remaining share is held by the Army. ACUD was created with an injection of capital roughly worth US$10.3B.

The new capital has been allocated an area of land roughly equivalent to Singapore, or 170,000 “feddans” in local terms.  This plot of land is located about 45km east of central Cairo, and 80km west of the Suez canal.

For Phase 1 of the new capital project, only a portion of the land area is being developed. The initial focus is building a central business district (CBD), local and regional transport (roadways, tunnels, bridges, an airport and a light rail to Cairo), residential real estate complexes, and shopping malls. Communications infrastructure is also part of phase 1.

Egypt’s government has liberalized its control of the sector cautiously over the years. The government retains an 80% stake in Telecom Egypt, 13 years after its IPO.  Since this IPO, competition has been introduced slowly in Egypt, and TE has been protected along the way. Even today, for example, TE is the only operator in Egypt allowed to install or operate commercial fiber networks.

TE remains the largest of Egypt’s four operator groups, along with the local units of Etisalat (UAE), Vodafone (UK), and Orange (France). The four accounted for a total $3.7B in telecom revenues for the last twelve months (LTM) covering 3Q17-2Q18.

Egypt’s incumbent operator retains over 90% share in the fixed line market. In mobile services, TE was given a 4G license ahead of its rivals in late 2016 and launched mobile services on its own network a year later.  TE still offers 2G/3G services through Vodafone Orange, in which it owns a 45% stake. The government-TE connection remains important context for the Egypt telecom market.

TE accounts for over half of Egypt’s capex

Most of Egypt’s communications infrastructure is built and owned by the top four providers. Aggregating capex from 2011-2Q18, TE accounted for 29% of the $9.6B total, followed by Vodafone Egypt and Etisalat (26% each), then Orange (19%). TE’s capex has come to dominate in the last two years, fueled primarily by DSL and 4G/LTE infrastructure buildouts, as well as international transmission (Figure 1).

Smart city in the desert

Egypt’s new capital is being built in the desert, in an area with almost no fixed physical infrastructure. The capital’s property developers are eager to boast of advanced connectivity and services in order to attract new customers. The basic connectivity goal is multiple layers of high-speed broadband access: FTTH/B to every premise, 4G wireless enhanced by small cells, and public WiFi. Project officials have also noted the importance of cloud connectivity, and are interested in attracting more data center investment to the region, including to the new capital. This will be a “smart city” relative to some others in the region, but won’t be comparable to more experimental projects like Google’s Sidewalk Labs.

Earlier this year, an Egyptian firm was hired to come up with a design for the new capital’s telecom network; more will be known about the results in the months ahead. One near certainty is that China will supply most of the technology; already, Huawei supplied most of the gear used by the University of Canada’s new branch in the new capital.

China raising its profile with the city’s Phase 2

While the city’s communications infrastructure is unsettled, construction for Phase 2 of the new capital is already underway. China remains the driver.

For the CBD expansion part of Phase 2, China Fortune Land Development (CFLD) has already won the construction project, per press reports.  To fund this, new capital officials have been negotiating with the three big Chinese banks regarding a $3.2B loan package. The actual loan terms are still in flux though, and apparently to be finalized by end of 2018. That isn’t stopping CFLD and other Chinese companies from actively pursuing other opportunities related to phase 2, including a petrochemical refinery.

Beyond the new capital, Chinese banks are active investors in Egypt; that has accelerated with Xi Jinping’s “One Belt One Road” campaign (aka Belt and Road Initiative). For instance, the National Bank of Egypt borrowed $600M from the China Development Bank last month.  However, Chinese interests have not taken over; multilateral institutions remain crucial. Most important, the IMF continues support for its original $12B bailout package. The World Bank loaned Egypt $1.15B earlier this month.  Numerous private banks around the Middle East and beyond are important creditors to the Egyptian government as well. China Inc, though, is making a concerted effort to convert its investment into local political influence – through promotional videos, for instance (Figure 2). Most tactics are less visible.

China is working hard to reassure OBOR countries that its intentions are pure, focusing on the positives of such projects as the new capital, minimizing such risks as debt traps. Until mid-2018, it was working very well, but more attention is being paid now.  Technology suppliers eager to have a fair shot at projects like the new capital will have to pay attention, too.