Commercialization of 5G in Saudi Arabia

Commercialization of 5G in Saudi Arabia

The fifth generation of wireless technology (5G) is steadily growing in the Kingdom of Saudi Arabia (KSA). During 2019, all three operators launched 5G service and are continuously increasing its coverage. The next major step for KSA, which the world is watching closely, is the development of cost-effective and viable 5G in vertical industries such as oil and gas, marine navigation, and connected cars.

Saudi Arabia, officially the Kingdom of Saudi Arabia, is the world’s 13th largest country by geographical area. The kingdom is bordered by Jordan and Iraq to the north, Kuwait to the northeast, Qatar, Bahrain, and the United Arab Emirates to the east, Oman to the southeast and Yemen to the south and it is separated from Egypt and Israel by the Gulf of Aqaba. It is the only nation with both a Red Sea coast and a Persian Gulf coast, and most of its terrain consists of arid desert, lowland and mountains (Figure 1). 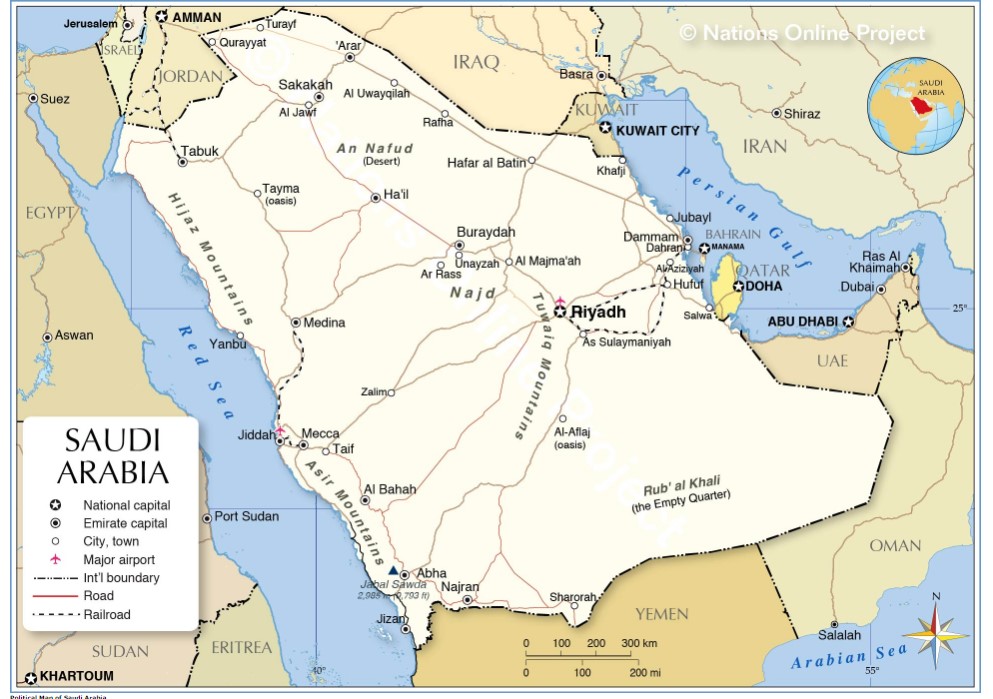 The Saudi economy is the largest in the Middle East and the 18th largest in the world. It also has one of the world’s youngest populations; about 40 percent of its 34.5 million people are under the age of 25. And, it also has one of the world’s highest immigrant population, about 30% of total. Immigrants account for around 70 per cent of the employed population and 80 per cent of the private sector workforce.

The Ministry of Communications and Information Technology (MCIT) oversees all information and communication technology matters in the Kingdom. It sets up policies and supervises ICT activities to contribute towards the socio-economic development of the country and citizens.

The regulator, CITC (Communications and Information Technology Commission) is responsible for regulating the affairs of the ICT and postal sectors in the Kingdom. CITC aims to create a highly competitive environment, provide excellent services to subscribers, and establish an attractive ecosystem for investors. It is also responsible for issuing ICT licenses (telecommunications licenses; radio frequency licenses; numbering licenses; and equipment licenses) and monitoring license obligations.

STC, Mobily and Zain Saudi Arabia are the three long-established mobile network operators (MNOs) in the country. The state owned and incumbent operator STC founded in 1998 lost its monopoly to Mobily in 2004. Zain, newest to the market, started its operations in 2008.

The mobile telecom sector has more than 42 million subscribers led by STC followed by Mobily and Zain respectively. Virgin Mobile Saudi Arabia and Lebara Saudi Arabia operates as MVNOs in the Kingdom. They utilize the infrastructure and radio spectrum of the MNOs to provide services.

STC and GO Telecom are the two fixed telecommunication licensed entities in the Kingdom.

Fiber optic penetration is on the rise due to vigorous efforts of the government and the industry since 2017. According to the MCIT two million urban dwellings were covered with fiber optic networks (FTTx) at the end of fiscal year 2018, with 0.78M subscribers or nearly double the 2015 total. Overall subscription for fixed broadband service stood at 33.7% of for the same period. (Figure 2).

KSA is a member of the 21 member-state Arab Satellite Communications Organization. ARABSAT is a satellite operator that provides broadcasting and telecommunication services across the Middle East, Africa and Europe. KSA has so far launched 16 low-earth orbit satellites.

KSA is considered as an important hub for submarine networks in the Middle East region, along with the UAE, Oman and Qatar. As of now, there are 13 in-service submarine cable systems connecting the Kingdom to neighboring countries as well to other continents.

KSA is one of the early adopters of 5G in the Middle East. One key reason is the concentrated effort made by both government and industry in its development. For instance, during the initial period of 2018, the government established the National 5G Task Force to speed up the availability of 5G. It also increased regulatory certainty through the Unified License scheme and released a sizeable amount of spectrum. Furthermore, in February 2019, the MCIT released an additional 400 MHz in mid-band (3.5 GHz) spectrum, taking the combined spectrum available for mobile services, including 5G, to around 1,000 MHz.

Operators have been deploying 5G after successfully completing trials. Zain has so far launched commercial 5G services in 27 cities, STC is deploying 5G home broadband services in a number of cities while Mobily has signed a memorandum of understanding with Huawei for the development 5G in the Kingdom. Zain has also recently launched 5G roaming service between KSA and Kuwait.

Huawei, Nokia, Cisco and Ericsson are all important players in providing the required radio access and core infrastructure for KSA’s 5G rollouts. For instance, STC says that it has blended Huawei and Cisco core networks with Ericsson and Nokia radio access networks.

The KSA’s key challenge is the commercialization aspect of 5G in conjunction with the heavy baggage of 2G, 3G and 4G networks.

The second, smaller hurdle – directly connected to the first one – is the availability of affordable 5G devices in the market. The current cost of a 5G device hovers around US$1,000 (~SAR 3,500). Close to 50% of the immigrant population is low-skilled and employed in low-paid jobs and thus are not eager to join the 5G bandwagon, at least in the near future.

The third hurdle will be the enablement of 5G in vertical markets. The list of stakeholders is long and complex. With many open as well as clandestine political agendas, it won’t be easy to come up with a solution. The concerned governmental agencies along with the corresponding industries (education, finance, health, maritime, telecommunication, tourism, transportation, etc.) will eventually face an uphill battle.

KSA is one of the richest countries of the world with a GDP per capita of over $23K at the end of 2018. The IMF expects the KSA economy to decrease by 0.2% in 2019 and grow by the same amount on average per year through 2024. In the telecom sector, the state-controlled structure has landed the operators in a reasonable financial state. With little possibility of any structural change and enough spectrum for 5G, the existing operators as compared to many other markets have few things to worry about, at least in the near term.

At the same time, to further streamline the process of effective and meaningful commercialization of 5G, the following steps can be considered by the government and the industry:

2G and 3G Services Shutdown: A long-term roadmap is needed to shutdown 2G and 3G services. 4G has been available since 2011, and 5G’s penetration throughout the kingdom will grow significantly in coming years. Thus it is prudent to have an effective plan to shut down 2G and 3G networks. At the same time the immigrant population (particularly the low-paid and /or low-skilled segment) has a high tendency to save money for families in their home countries. Thus they prefer cheaper 2G/3G phones over more tech-savvy and high-end devices. Regulators and operators should jointly consider developing a detailed roadmap for the discontinuation of 2G/3G services. It will free up capacity, reduce the number of network elements, reduce carbon footprint, reduce operators’ annual license costs, and allow spectrum to be returned to the regulator or to be reused for 5G if possible. In a nutshell, it will improve networks’ quality of service and the overall financial health of operators. Transition issues such as QoS (quality of service) degradation and vendor contract renegotiation are manageable.

5G Device Cost: Operators may further increase their due diligence with the device suppliers to lower the cost of 5G devices to attract the low-paid immigrant population. The current cost of a 5G device in KSA hovers around US$1,000 as compared to $10-$30 for 2G/3G phones.

Vertical Markets: The success of 5G to a large extent depends on its enablement in vertical industries. An effective roadmap is needed to strengthen 5G in IoT (Internet of Things), AI (Artificial Intelligence), and V2X (vehicle to everything – connected cars) markets.