Telcos aim for the cloud by partnering with webscale cloud providers

Telcos worldwide are deploying 5G connectivity services at a brisk pace. And with that comes the challenges of being able to monetize the new 5G-based services, ensure network operations efficiency, and optimize costs (capex and opex). Fortunately, telcos don’t have to look for several collaborators to solve these problems alone, as leveraging the capabilities of webscale cloud providers appears to be the best choice to address such challenges. The past couple of years have witnessed a spurt of significant investments by the big three cloud providers – AWS, Microsoft Azure, and GCP – who are serious about making considerable headways into the telecom vertical. The sudden gush of their partnerships with telcos in the recent times is a testimony of those efforts.

Looking at the first concern of over-dependency, in fact, telcos are in the driver’s seat as far as how much value they want to cede to cloud provider partners. This can be addressed by adopting a multi-cloud or hybrid cloud approach to mitigate dependence on a single cloud provider. While the scale of control or dependency in a partnership will be dictated by telcos, some dependency is inevitable, i.e. telcos can decide how dependent they want to be on cloud providers, but ultimately, they cannot weed out some level of dependency on cloud providers for certain tasks. That’s because even if telcos manage to develop cloud expertise internally or through partnerships, webscale cloud providers will always strive to continually improve their expertise and offerings – something that telcos will find difficult to keep pace with, in the long run. Telcos are best off leaving it to the experts.

On the matter of webscale cloud providers threatening telco businesses to replace them as connectivity providers, that will remain far from reality. Telcos are here to stay for several reasons that includes owning the key piece of the stack which the cloud providers don’t have, for example the nationwide real estate of network edge sites such as base stations and content delivery networks (CDN). Most importantly, telecom is a highly regulated industry and that’s a big barrier for webscale cloud providers who are already battling regulators over security, privacy, and market power issues in key markets.

There’s no doubt that more telco-webscale cloud partnerships will line up in the coming months and years. After leading telcos lay the groundwork, small- and medium-sized telcos will eventually follow suit to ensure that they are not left behind the race. The next 2-5 years will be crucial for the partnerships announced so far between telcos and webscale cloud providers. All eyes will be on whether the deals translate into earnings and costs benefits while transforming telcos’ complex networks, and how significant the cloud providers will evolve along the journey.

Summary – page 2
Telcos dial-in cloud providers for network transformation and mobile edge connectivity – page 2
Collaboration is the need of the hour for telcos – page 4
For cloud providers, telco partnerships could be a way to take the “charge” – page 7
Telcos and cloud providers need to find a middle ground for a thriving partnership – page 8
About – page 10 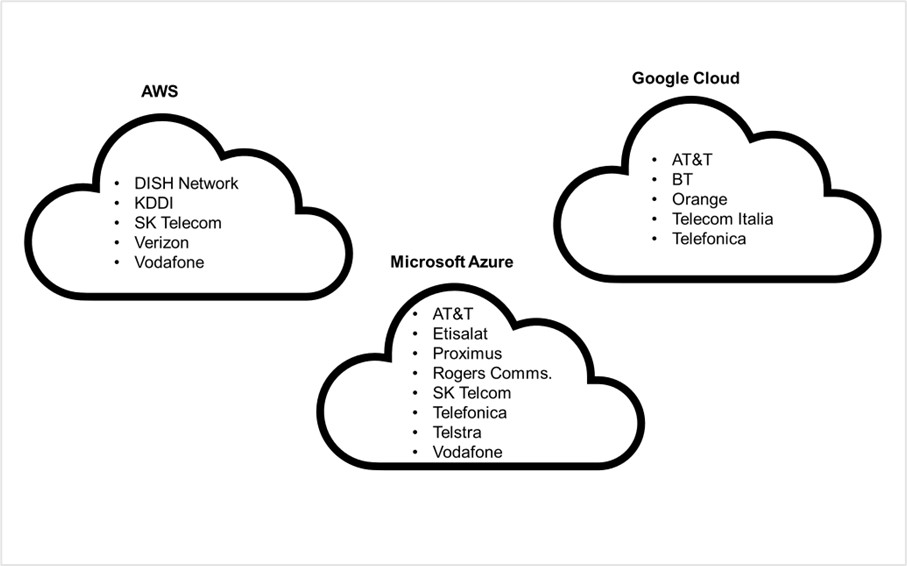 By Arun Menon On April 8, 2022 This market review provides a comprehensive assessment of the global telecommunications industry based on financial results through D... read more

By Matt Walker On April 8, 2022 The telco network infrastructure (Telco NI) market had a blockbuster year in 2021. Vendor revenues in the telco vertical surged 7.8% ... read more