Global economies have recovered from the worst of last year’s pandemic, but COVID-19 has caused some long-term shifts in market dynamics. Network traffic growth rates have accelerated, new business models emerged, cloud services matured and spread to new verticals, applications and customer sizes. Networks are more important than ever. Revenue growth rates and profitability in all three segments that we track – telco, webscale, and carrier-neutral – have been stronger in recent quarters than anticipated. Network investments have grown, at sometimes stunning rates. Total network operator capex, across the three segments, is likely to total US$520 billion (B) in 2021, up 13.4% from 2020. Much of this year’s growth came from webscale, which will end 2021 at about 32.1% of total capex, from 29.3% in 2020. But telco and carrier-neutral capex have also spiked.

Looking ahead to 2026, capex growth rates will slow considerably but total capex is likely to reach $629B by 2026. In that year, telco, webscale, and carrier-neutral segments will account for roughly 51%, 40%, and 9% of capex, respectively. Networks will increasingly revolve around data centers, which will continue to proliferate both at the core and edge. Data center innovation will continue to be rapid, as webscalers push the envelope on network design and function, and telcos seek cheaper ways of running their networks. The telco need for cost efficiency will rise as overhyped 5G-based opportunities fail to materialize in any big way. Carrier-neutral operators (CNNOs) will remain important to telcos and webscalers, and benefit from an ongoing wave of new capital which will help them transform to more integrated providers of “digital infrastructure” assets.

MTN Consulting’s Global Network Infrastructure (GNI) service tracks the economics of telcos, webscalers, and carrier-neutral operators. The three groups are not homogenous. Webscale revenue models revolve around a diverse mix of advertising, devices, software, cloud services, and ecommerce. Carrier-neutral providers rent network infrastructure to other businesses. Telcos sell subscription and pay-as-you-go services for communications services, including bandwidth, video, mobility, and enterprise services. There is a huge amount of variety in these discrete market segments. What’s more important, though, is that the three segments rely on each other in important ways. Carrier-neutral players get most of their revenues from telcos & webscalers needing to fill gaps in network coverage. Telcos rely on CNNOs to lower their cost of operations, and need webscalers to provide services and apps which make their network worth using beyond telephony. Webscalers lack last mile access networks, and can only deliver their services to the mass market over telco infrastructure. Webscalers also, despite big capex outlays, can only blanket the globe with data centers by partnering with CNNOs for collocation.

Looking ahead, this interdependence will grow. The big cloud providers in the webscale market, for instance, have targeted the telecom vertical and found success; AWS, Azure and GCP recorded about $2B in revenues from telcos over the last 4 quarters. Telcos are making some big bets on cloud technology as they deploy 5G core networks. Both telcos and webscalers want to provide seamless, resilient network coverage, including at the edge, and can’t build it all themselves. As a result, they’ll need to scale up their partnerships with carrier-neutral players like Equinix and American Tower/CoreSite. CNNOs are increasingly taking over the “dumb pipe” aspects of the network, and to be competitive and upsell they will integrate assets across fiber, cell tower and data center.

Telco revenues will grow just a bit; capital intensity to fall after 2023, towards 15% range

From an unusually weak 2020 base, telco revenues are likely to grow nearly 7% in 2021 to $1,912 billion, but growth thereafter will return to the more typical 1-3% range per year range. By 2026, telco revenues are likely to measure $2.1 trillion. Telco capex is also rising in 2021, up about 8% to $317B, and will hover around $330B for the next three years until falling to $320B by 2026. Drivers for investment in the near term include: expanding 5G RAN coverage; infrastructure for new 5G-based services; replacing Huawei gear; government subsidies of fiber deployment (US and Europe, mainly); 5G stand-alone core projects; transmission and IP-layer (e.g. intent-based routing) upgrades; network automation; and a broad range of software investments, including projects done in collaboration with webscalers (which do impact capex, thanks in part to flexible accounting rules). Software will rise from about 15% of capex last year to 20% by 2026. The main constraint on telco investment is limited prospects for top-line growth. Telcos will remain in a constant battle with their cost structure, seeking to deploy technologies which help lower cost per bit, lower energy costs, lower the cost of running networks. Telco collaborations with webscalers on service creation and delivery, and network offload, will also help on the cost side, as will reliance on CNNOs for key network assets.

Regionally, the strongest capex growth rates (from a 2020 base) will be seen in India and MEA. India has all of its 5G deployment ahead of it. MEA includes markets with very underdeveloped fixed network infrastructure, and increased data center & subsea investment underway should help spur this along.

The webscale sector saw incredible growth rates in 2021 on the back of changes wrought by COVID: cloud services adoption, ecommerce spreading far and wide, and a strong digital ad market. Adoption of 5G devices has also helped one key webscaler, Apple. As a result, total webscale revenues exploded from $1.71T in 2020 to about $2.14T in 2021. Growth will slow but the sector will continue to leverage its scale and cash to push into new markets, with 2026 revenues likely to reach about $3.46T. Capex also spiked in 2021, likely to end the year at about $167B (2020: $134B), and will hit about $253B by 2026 even with significant slowdown in growth. About 45% of the 2026 capex budget will for Network, IT and software investments, from about 41% in 2021 when ecommerce-related investments were relatively important.

While webscalers have different business models, they all need massive data center-centric networks to support their operations. Webscalers continue to build out huge facilities at the core, across the globe, and also building out network edges to improve resiliency, latency and coverage. They’re also investing heavily in new technologies for their data centers, to economically support their growth and deliver new services and network functions. US-based webscalers have been doing this for many years, and Facebook announced a big new capex push for 2022 recently aimed at implementing more AI/ML capabilities in its facilities, to support “ranking and recommendations for experiences across” its products. Increasingly the Chinese players are getting in the self-design game. At Alibaba’s recent Apsara conference, for instance, the company unveiled several new proprietary products, including the Yitian 710 server chip, the X-Dragon architecture, the Panjiu cloud-native server series, Alibaba AI and big data platform and a new generation of PolarDB database.

Carrier-neutral the smallest market but plays key role, will grow capex share to 9% by 2026

As we discussed in a mid-2021 report, the carrier-neutral sector is currently seeing a transformation driven by the desire to integrate multiple types of assets under one roof. That includes companies acquiring across traditional asset boundaries, such as the recent American Tower-CoreSite acquisition, and the investments by private equity firms to invest across asset classes. There will be bumps in the road as a new breed of CNNOs emerge, but they are likely to play even more important roles in the network infrastructure market within 2-3 years. Their integrated offerings will prove attractive to both telcos and webscalers, for financial and operational reasons, and allow them to focus more on their core businesses.

The CNNO segment is the smallest we cover, but its revenues will more than double between the 2020 base of $76 billion to reach roughly $155B by 2026. Their capex will come close to doubling, up from $29B in 2020 (6.4% of the combined telco/webscale/CNNO total) to about $56B in 2026 (8.9% of total). Much of the CNNOs’ capex is devoted to real estate and low-tech investments, but they will also invest significant sums on transport, IP, and other types of network infrastructure. Digital Realty, for instance, recently signed a data center interconnect deal with Ciena.

CNNOs’ power management strategies will also be key to helping the network operator market improve its carbon footprint. In fact, sustainability is a common investment theme cutting across all three types of network operators. Telcos are most important, as they have the oldest, most complex networks and also the biggest opportunity for improvement. Across the key segments, most key network operators publish sustainability reports and have stated targets for carbon neutrality and/or net zero status. In the past, energy cost savings was the key motivator. Increasingly, though, key executives across the network operator industry are addressing sustainability as a moral issue which requires urgent attention, and investment – these leaders should be applauded.

Totals for all operators

Telcos: Revenues ($B) vs. capital intensity
Software capex in US$B and as % of total capex
Telco opex components, 2020 vs. 2026
Telcos: Capex and network operations opex ($B)
Telcos: Employees vs. average labor cost per employee ($K)
Telcos: Labor cost opex in US$B and as % of Opex ex-D&A
Telco margins, actual and predicted
Dec 2021 vs. Dec 2020 forecast: % changes in key metrics 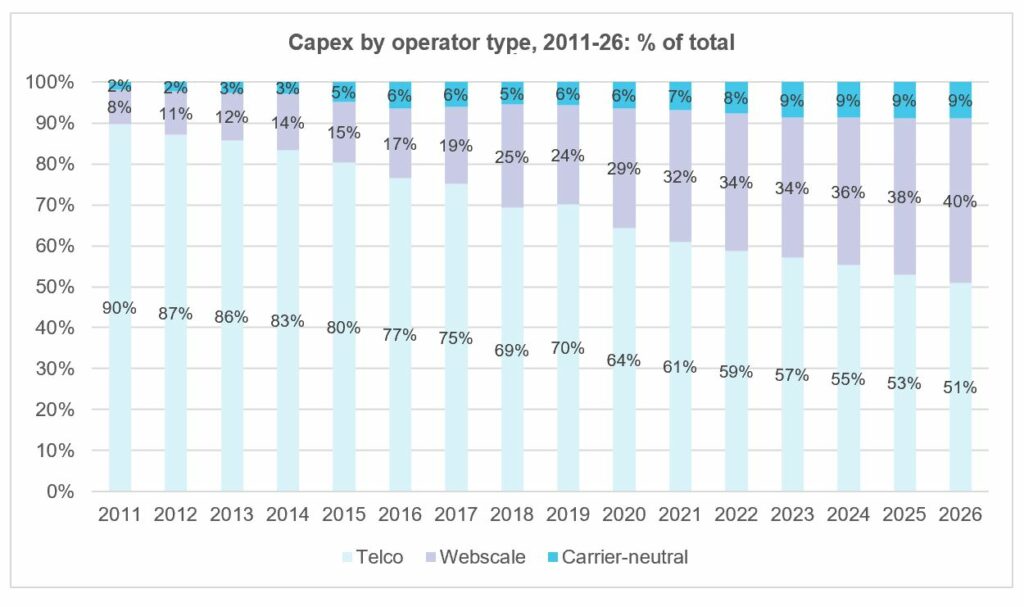 By Matt Walker and Arun Menon On November 26, 2021 MTN Consulting’s Telco Opex Analyzer analyzes the opex trends of a subset of key telcos in the telecommunications ... read more

By Matt Walker On November 10, 2021 Oracle announced the launch of its 33read more