MTN Consulting segments the carrier-neutral network operator (CNNO) market into three parts based on asset focus: towers, data centers, and bandwidth (fiber). These dividing lines have always been imperfect as there is some ownership across asset category. Some of that crossover has come from M&A, as for example with tower specialist Crown Castle’s 2017 acquisition of Lightower and its vast fiber network. Some has come from incremental expansion of business models, as with Zayo building small cells on top of its fiber network, or Equinix’s investment in data center interconnect optical networks. Some has resulted from a telco spinning off multiple types of infrastructure at once, creating a new entity like the Uniti Group with holdings across fiber, towers, and data centers. Private equity investments across sector boundaries has also driven some of the integration, a trend which is accelerating now thanks to Digital Bridge, GI Partners, Macquarie and others.

Looking forward, MTN Consulting expects the CNNO market to be driven by entities with holdings across all three types of infrastructure. Publicly held and private equity-controlled CNNOs will seek to offer integrated “digital infrastructure” to communications network operators, with a focus on the telco and webscale markets as their primary customers. One of many reasons for this integration is the challenges faced by today’s CNNOs: high levels of debt, weak cash flows, declining tenancy ratios in the tower sector, and the emergence of a need for data center and fiber buildouts at the network’s edge. There will continue to be many niche CNNOs focused on one specific type of asset, or two (e.g. towers and fiber), but the economic logic for a more integrated offering is compelling. The new breed of CNNOs will compile some of their network by M&A, as they always have, but there will be significant new investment in network expansion, especially in the data center and fiber space.

There will be challenges faced by the integrated CNNO, to be sure. The skillsets, software, and supplier relationships involved in building and operating towers, data centers and fiber networks vary widely. However, customer needs will drive this integration, along with the realities of scale economics.

The main customers for CNNO resources are telecom and webscale network operators. Increasingly telcos are aiming for asset-light operating models to cope with limited new revenue opportunities; most are happy to rent physical assets rather than build and operate their own. Telcos also now rely on other providers, namely the webscalers, for some of their service innovation and deployment. For their part, webscalers have spent heavily on construction of new data centers in recent years, and have built their own fiber networks in some locations – but this is not their core competency. The need to grow quickly has kept many functions in-house for the webscalers, but the CNNO sector has an opportunity to entice webscalers to outsource more of these functions.

On the supply side, vendors, construction firms, and subcontractors will benefit from an integrated approach to working with tomorrow’s leading CNNOs, whether private or public. CNNO margins will remain tight so there will be a strong interest in growing to scale and exploiting synergies across multiple infrastructure types. For instance, vendors who can advise CNNOs on how to design the data center, and supply optical networking equipment, and help procure fiber in bulk, and source passive network gear for towers will find a receptive audience. Construction firms able to execute large projects across multiple regions will have a leg up on smaller regional firms. Speed to market and competitive pricing will be key on the supply side, as CNNOs’ customers will only outsource their tower, fiber and DC needs if they can procure what they want when they want it, at competitive prices.

Figure 3: Facebook’s recent terrestrial fiber deployments in the US 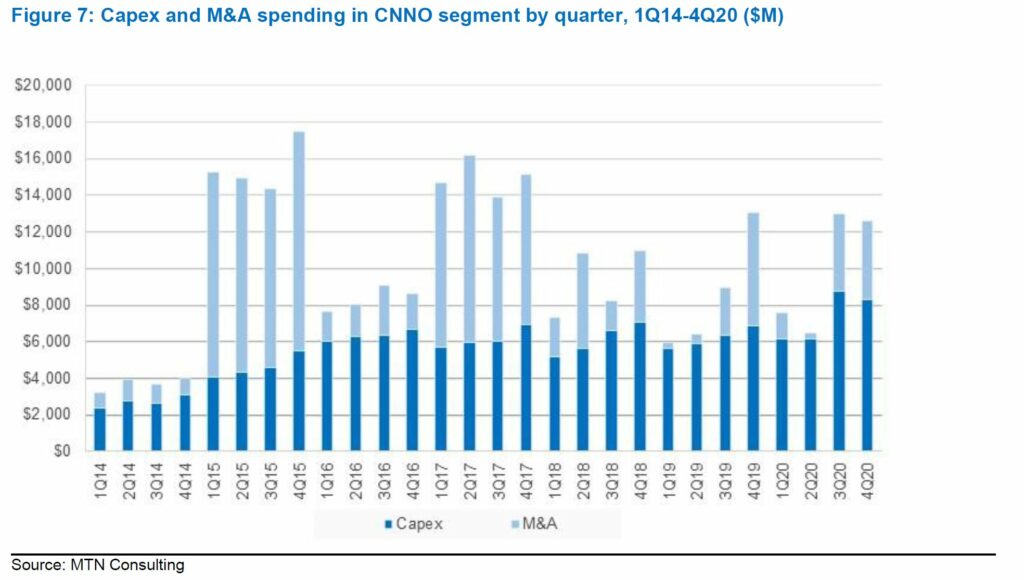 By Matt Walker On April 8, 2021 Webscale surges to $1.71 trillion in revenues, about to overtake telecom sector read more