Oracle announced the launch of its 33rd cloud region this week, in Singapore. It plans to expand its footprint to 44 regions by year-end 2022. Oracle has prioritized a rapid expansion across the globe, relying on third-party colocation providers for most of its data centers, and building a single availability zone per region, at least to start. The company is in a race to catch up with the big 3 (Amazon, Google, and Microsoft), and recognizes that many of its customers are eager to migrate to the cloud, and they have options.

Oracle’s cloud rush is apparent in its capex stats. The company’s capex has grown quickly in recent quarters, reaching over $1B in 3Q21; annualized capital intensity through 3Q21 was 6.8%, the company’s highest in at least the last decade. Still, this is far below big 3, which all spend well over 10% of revenues on capex. Oracle’s capex is not likely to decline anytime soon, given its global plans; it expects capex to double for the fiscal year ended May 2022. Oracle’s push also has a secondary effect on the capex plans of its colocation partners. Companies like Digital Realty and Equinix, both of which provide space to Oracle in multiple markets, are increasingly building out more resilient, rich networks beyond the data center itself. Digital Realty’s recent data center interconnect contract in Asia with Ciena is just one of many examples. As MTN Consulting has argued separately, the carrier-neutral players are likely to continue to expand their reach across multiple types of infrastructure. One reason for this is CNNOs’ support for the global growth aspirations of the webscale sector. 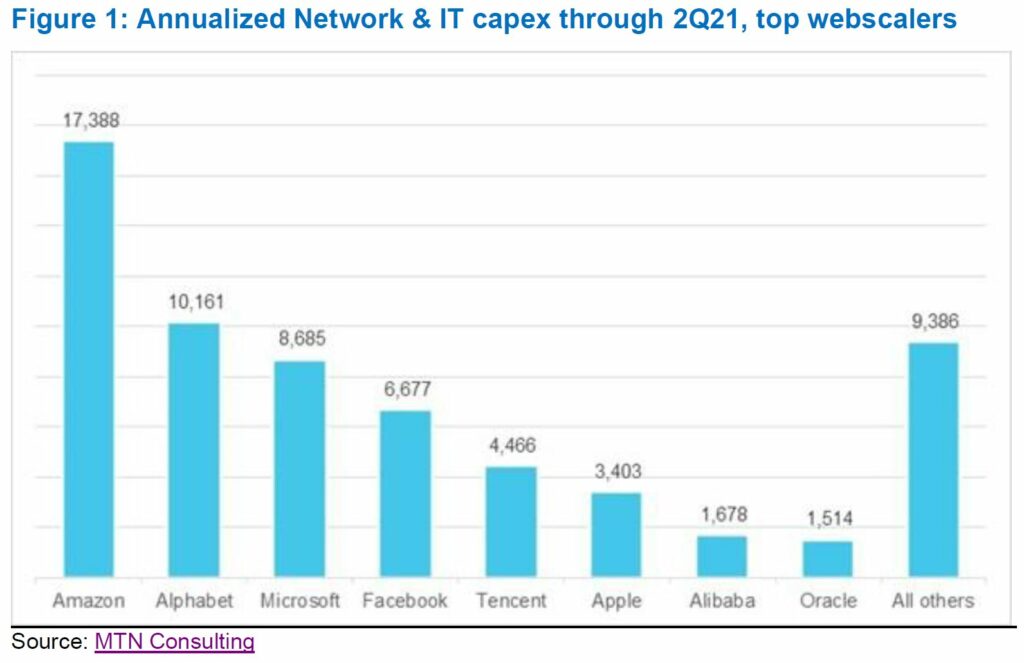 By Matt Walker and Arun Menon On June 3, 2019 The world's largest technology companies are investing heavily in webscale networks. These are centered around enormous webscale, als... read more
Subscribe