Preliminary fourth quarter earnings results from the webscale segment of network operators (WNOs) indicates a continued strong appetite for data center and cloud investment. Companies reporting to date include Alphabet (Google), Amazon, Apple, Meta (Facebook), Fujitsu, IBM, Microsoft, Oracle, and SAP. For these 9 webscalers, CY2021 capex totaled $146B, up an astounding 32% YoY. Capex in 4Q21 for the same group was up 20% YoY. Amazon and Microsoft, the leading cloud providers, drove growth in both 4Q21 and 2021 overall. These preliminary results for 4Q21 are consistent with MTN Consulting’s forecast of $167.1B capex in 2021 for the webscale sector (up from $134.4B in 2020). Webscalers’ network spending outlook for 2022 is positive overall, driven by Meta (Facebook) and Alphabet (Google). Amazon’s total capex in 2022 is unlikely to rise but the network/IT component will be more prevalent. That’s due to Amazon’s continued expansion of its AWS regions to support the ongoing growth of this business, whose revenues grew 40% YoY in 4Q21 to $17.8 billion.

As cloud providers compete on footprint, and all webscalers deploy more complex functionality into their networks (video, gaming, AI, metaverse), webscale capex should remain strong. However, webscalers do have some financial pressures, and more important have an increasingly rich range of options for how they expand. The carrier-neutral segment (CNNO) of data center players is investing heavily in larger, more hyperscale-friendly and energy efficient facilities. Further, the sector is consolidating with help from private equity. MTN Consulting expects webscalers to continue to lean heavily on these third-parties for expansion in 2022 and beyond. As a result, data center CNNOs like Digital Realty, Equinix and its JV partners, QTS/Blackstone, CyrusOne/KKR/GIP, American Tower/CoreSite, and GDS will become more attractive to vendors as they invest more in network technology of their own.

Figure 1: Annualized webscale capex for 9 reporting companies and all others, 4Q16-4Q21 (US$B) 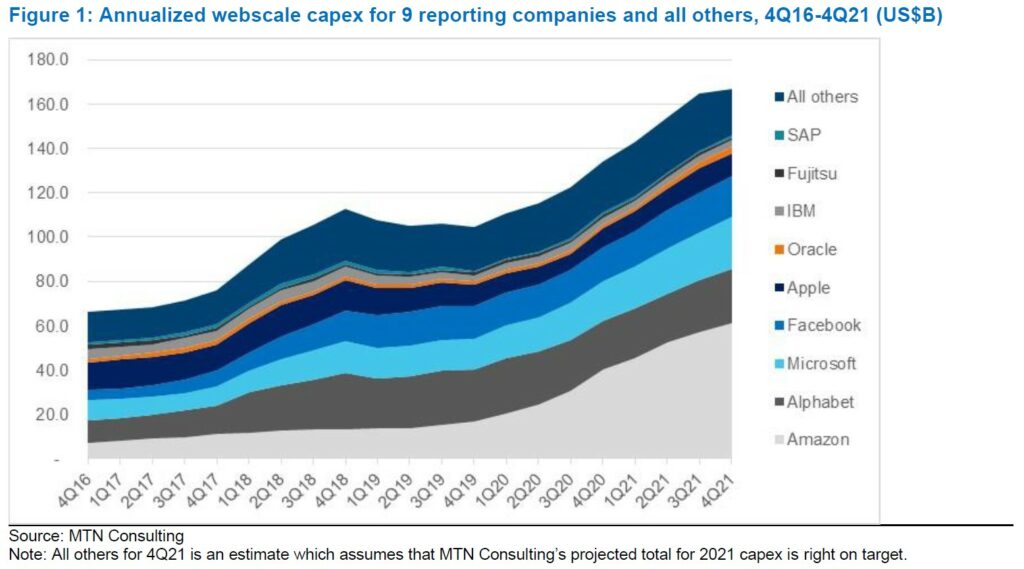 By Matt Walker On December 18, 2021 Global economies have recovered from the worst of last year’s pandemic, but COVID-19 has caused some long-term shifts in market dyn... read more

By Matt Walker On December 16, 2021 Revenues for the webscale sector of network operators passed the $2 trillion mark in 3Q21, on an annualized basis, growing 29.1% YoY ... read more

By Matt Walker On November 10, 2021 Oracle announced the launch of its 33read more
Subscribe