The webscale sector has fallen back to earth recently. During COVID, the sector exploded as many activities moved online and ecommerce surged. That growth has been impossible to sustain. Topline growth in single quarter revenues has fallen steadily since the 1Q21 peak of 37%, to record just 4% YoY in 2Q22. Among the “top 8”, half saw revenues decline in 2Q22 on a YoY basis: Facebook, Alibaba, Tencent, and Baidu. All 8 have seen their growth rates fall sequentially, for each of the last 3 quarters.

Annualized revenue growth has now fallen below its long-term average. Annualized revenues reached $2.21 trillion for the 2Q22 annualized period, up 12% YoY. Supply chain constraints, inflation, and a war in Europe all hit growth, as does a weak economy and tight online regulations in China. These factors are also impacting webscale profitability: net profit and cash from operations both declined on a YoY basis in 2Q22. Despite the recent stumble, there are few signs of a prolonged slowdown. Ad revenues are being watched closely, though, as the sector as a whole remains heavily reliant on this revenue stream.

All regions saw a decline in their revenue growth rates in 2Q22. The Americas held out the best, with a 9% YoY increase (1Q22: 13%). Asia-Pacific was weakest, as its revenues declined by 1% YoY in 2Q22 due largely to China’s slowdown.

Capex and R&D spend are near all-time highs as a % of revenues. Capital intensity has been rising gradually since 2019; R&D has grown more recently, due in part to Facebook.

In USD terms, annualized capex has increased dramatically in the last 2 years, reaching $194B in 2Q22, from $117B in 2Q20. The tech (network/IT/software) portion of capex is in the low 40s %-wise, down from nearly 50% in late 2018/early 2019. Webscalers have been investing more in land/property and new data centers recently; tech’s portion will rise in coming quarters.

The top 3 cloud providers plus Facebook were 73% of 3Q21-2Q22 capex, a bit higher than the 72% recorded in the 2Q21 annualized period. That’s because of Facebook’s metaverse-driven spending spree. Still, Amazon is the spending standout, accounting for 34% of total annualized capex in 2Q22, or 27% or annualized tech (network, IT and software) capex. Across the top webscalers, capex has surged due to new data centers, supporting cloud services and new network functions. Smaller webscalers struggle to keep up, now relying more on third party data centers and migrating to capex-light strategies. That’s especially true for IT services focused companies like Cognizant, Fujitsu, HPE, IBM, and SAP.

Regionally, the Americas account for the majority of the global market, with the US at the center. For instance, both Alphabet and Facebook (Meta) say well over 70% of their “long-lived assets” are in the US. Going forward, the non-US portion should rise as the cloud providers within the webscale market build out their global data center footprints. Consider Google Cloud, for instance. GCP regions currently under development include Doha (Qatar), Turin (Italy), Berlin (Germany), Dammam (Kingdom of Saudi Arabia), Tel Aviv (Israel), Mexico, Malaysia, Thailand and New Zealand; regions launched to date in 2022 include Milan, Italy; Madrid, Spain; Columbus, Ohio; and Dallas, Texas; and a third data center in Singapore (August 2022).

Annualized webscale capex is now nearly 60% as much as telecom sector capex. Webscalers’ R&D spend is more significant. While telcos spend at most 1-2% of revenues on R&D, webscalers’ R&D spend for the 2Q22 annualized period amounted to 10.9% of revenues. Large portions of this R&D are network-related, as the biggest webscalers have bleeding-edge requirements for the technology they deploy in their network. That has led them to drive the creation of many new innovations in network infrastructure over the last few years. These span semiconductors, optical transmission and components, intent-based routing, network automation, and other areas.

As revenue growth rates have fallen, profit margins have also tightened in the webscale sector. Free cash flow, defined as cash from operations less capex, amounted to 14.4% of revenues for the 2Q22 annualized period. That’s down from 19.6% in 2Q21. The margin is still comfortable relative to many other sectors, though. Net profits as a percentage of revenues were 16.3% for 3Q21-2Q22, a bit down from recent quarters. The dip is mainly due to one-time factors at several companies, most of which related to write-downs on the value of investments (e.g. Amazon/Rivian).

The webscale sector’s key players occasionally come under fire for retaining vast hordes of cash on their books. The response is usually to emphasize the need to save for a rainy day, or when there is a need to spend big in order to forestall a new competitor entering the market. The last year has seen both ‘rain’ and new competition. As a result, the sector’s overall cash position has weakened: cash & short-term investments totaled $633B in June 2022, down from $771B a year earlier. Both figures are comfortably higher than debt, however.

Who benefits from webscale capex?

A broad set of vendors are benefiting from WNO capex spending – from semiconductor players selling into the data center market (Intel, AMD, Nvidia, Broadcom, etc), to optical components & transport vendors selling into data center interconnect markets (e.g. Ciena, Infinera, II-VI, Lumentum/ Neophotonics), to contract manufacturers of white box/OCP servers (e.g. Wistron and Quanta). Cisco, for instance, recorded approximately $4.0B in 2021 sales to the webscale sector, up from about $2.1B in 2020. The construction industry also sees webscale as important, as much of their capex is for development of data center properties.

Our current forecast calls for $188B of webscale capex in 2022, and further growth in the out-years until capex hits about $276B in 2026. The 2022 target has already been exceeded, based on the 2Q22 annualized figure. We are maintaining the 2022 target, though, as despite Facebook’s ambitious spend there are some signs of a conservative outlook from a few other providers, and ongoing issues in the supply chain. Capex guidance from the major webscalers on 2Q22 earnings calls is as follows:

Amazon: “we do expect to spend slightly more on capital investments than last year, but the proportion of capital spending shifts among our businesses. We expect technology infrastructure spend to grow year-over-year, primarily to support the rapid growth in innovation we’re seeing with AWS.”

Alphabet: “We continue to expect an increase in CapEx in 2022 versus last year…For the balance of 2022, the increase will be particularly reflected in investments in technical infrastructure globally with servers as the largest component.”

Microsoft: “…the big driver of our growth this quarter was in data center spend, both new and newbuilds as well as adding capacity to existing data centers. We are seeing, obviously, good demand signal[s]. So hence, we’ve guided to another strong spending quarter in Q1 … Although it’s a sequential decline, I would think about that more as being timing. [Capex] can move around a little bit just based on when builds are complete or when shipments come in. We do feel that we’ve gotten in a good place on capacity on a global basis and are focused on making sure our customers can drive the new units they need, the new usage they need in those data centers.”

Facebook (Meta): still expects 2022 capex, including principal payments on finance leases, to be in the range of $29-34B, significantly up from 2021. “Capital expenditures, including principal payments on finance leases, were $7.7 billion, driven by investments in servers, data centers and network infrastructure. The big step-up in CapEx, both year-over-year and sequentially, related to server spend, including for our AI infrastructure…there’s a lot of work to do here and a lot of the investment is in AI compute CapEx. But I’m confident that if we invest in building the new infrastructure that we need, then we’re going to come out of this downturn with even more superior ad products and a meaningful technology advantage over other industry players.”

Oracle: “Clearly, there’s strong demand for our cloud services, and we intend to … capitalize on it. As such, I expect our CapEx spend will be higher in FY ’23 [ended May 2023] to meet the demand. We expect to add another 6 regions in fiscal 2023 in addition to the 38 cloud regions across 20 countries that we have already serving our customers…we have so much cloud demand that I am going to continue to spend in capital expenditure.”

Tencent, Alibaba, Baidu, and JD.Com: have not provided capex guidance recently. Given tough economy, new regulations and weak recent growth, their capex is constrained. In 2023 and beyond, though, Tencent is one to watch, as it has hinted at Facebook-like investments in the “metaverse,” says it has a lot of the building blocks needed, for example, “a lot of gaming experiences…very strong social networking experience…engine capability, we have AI capability, we have the capability to build a large server architecture that can serve a huge number of concurrent users. We are very experienced in managing digital content economies as well as real-life digital assets.”

Webscalers with cloud operations are building out their data center footprints, and most webscalers are deploying more complex functionality into their networks (video, gaming, AI, metaverse). However, webscalers do have some financial pressures, and more important have an increasingly rich range of options for how they expand. The carrier-neutral segment (CNNO) of data center players is investing heavily in larger, more hyperscale-friendly and energy efficient facilities. Further, the sector is consolidating with help from private equity. MTN Consulting expects webscalers to continue to lean heavily on these third-parties for expansion in 2022 and beyond. As a result, data center CNNOs like Digital Realty, Equinix and its JV partners, QTS/Blackstone, CyrusOne/KKR/GIP, American Tower/CoreSite, and GDS will become more attractive to vendors as they invest more in network technology of their own.

One issue with more reliance on third-parties, though, is sustainability. As a whole, the carrier-neutral sector is behind the curve on investing in renewable energy resources. If webscalers want to make credible boasts about their environmental impact, they will need to present data on their overall usage of renewable energy, not just what’s used by their own data centers. Water consumption is another issue of importance in this area, and even harder to track. 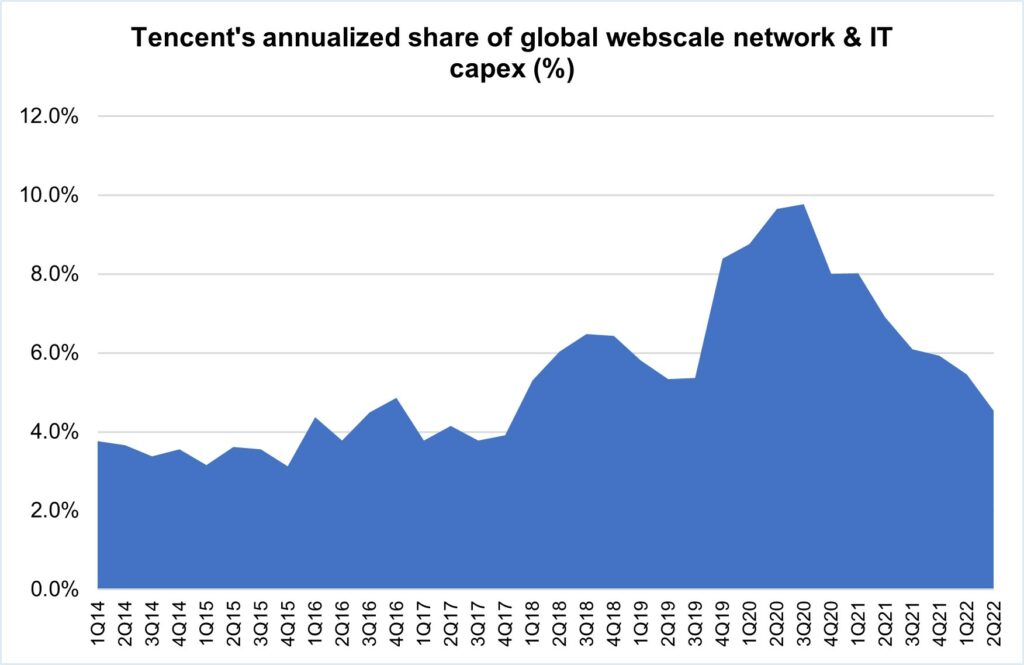 By Arun Menon On August 23, 2022 Telcos worldwide are finally getting onboard the 5G bus, delivering high speeds with low-latency and seamless experience to enterpris... read more

By Matt Walker and Arun Menon On May 23, 2022 Multiple types of companies are investing heavily in data center assets. Two years ago, the data center market was already vibrant, b... read more

By Matt Walker On October 29, 2021 The webscale sector of network operators spent nearly $1 trillion on R&D in the last decade. A rising portion of that R&D has... read more
Subscribe