The goal of this report series is to equip telecom industry decision-makers with a comprehensive view of spending trends and vendor market power in their industry. To do this we assess technology vendors’ revenues in the telecom vertical, across a wide range of company types and technology segments. We call this market “telco network infrastructure”, or “Telco NI.” This study tracks 132 Telco NI vendors, providing revenue and market share estimates for the 1Q13-3Q22 period. Of these 132 vendors, 108 are actively selling to telcos; most others have been acquired by other companies in the database.

Despite economic turmoil and a weak top-line for telcos, the spending climate remained good. A few countries are just starting to deploy 5G, notably India; many more continue to scale up 5G to reach mass market coverage, and deploy fiber to support fixed broadband and to connect all the new radio infra (including small cells) needed for 5G. There is also a growing number of stand-alone 5G core networks, which is helping the cloud providers improve their penetration into the telco sector.

Along with telco capex, vendor revenues in Telco NI have also been rising since COVID ebbed. On a single quarter basis, Telco NI revenues have increased YoY for each of the last 8 quarters. In 3Q22, Telco NI revenues grew by 2.0% YoY, to $58.9B; annualized revenues for 3Q22 grew 4.5% from the 3Q21 period, to hit $238.6B, the highest total since our database began in 1Q13. The US dollar’s recent strengthening means that underlying market growth may be much higher.

Market growth with and without Huawei has been about the same over the last two quarters. Despite big drops in total company and overseas carrier revenues, Huawei’s Telco NI market share in China has grown over the last three years, and Chinese spending remains strong. The company has invested heavily in its software, services and cloud groups to counteract the effect of the bans. Huawei also retains a number of large accounts in big overseas markets, e.g. Etisalat, Telkom South Africa, Orange, and others. Many European telcos remain reluctant to fully close the door on Huawei, and Huawei remains a popular choice in many parts of Asia, MEA, and Latin America. Huawei’s lack of access to certain components will hobble it more over the next 2 years, though, as telcos upgrade IP/optical networks post-5G rollout, and start looking at 5.5G/5G-Advanced.

The top three Telco NI vendors have been the same since 1Q16: Huawei, Ericsson, and Nokia. They account for 38.3% of the annualized market, or 36.2% in 3Q22 alone. For most of 2016-21, they captured >40% of the market, but Huawei’s share has fallen recently, and new vendors have crowded out the three giants (e.g. Amazon, Microsoft, Alphabet, Dell, VMWare…). Focusing on these top 3: Huawei has dropped slightly in recent quarters, but remains dominant due to China. Ericsson’s share has been flat for many years, aside from an improvement in 2021 due to 5G RAN; it currently is focused on building an enterprise business, leveraging Vonage and Cradlepoint. Nokia, including ALU for pre-acquisition years, also dipped in 3Q22 (vs. 3Q21) as 5G RAN rollouts slowed. Nokia says its market share is “not reflecting the competitiveness of our products today and tomorrow, because it takes some time to recover some of the losses from the past years in the CSP space.”

China Comservice and ZTE have been trading the 4 and 5 spots off and on since early 2019. Notably, though, China Comservice is majority owned by Chinese telcos, and is not truly independent. Among the top 5, only ZTE has seen steady improvements recently. It has benefited more from Huawei’s troubles than any other supplier, although like Huawei it is heavily tied to revenues from its domestic market.

Cisco is in the 6th position, though its revenues are dependent on product cycles in the IP infra space, and (lately) its success in mobile core deployments. Intel is 7th due to data center, virtualization, edge compute and other telco projects, some done directly and some on an OEM basis. CommScope, NEC and Amdocs rank 8-10, due to strength in connectivity, Japan (and global microwave), and network software, respectively.

The top five vendors, in terms of YoY revenue growth, are the same for both 3Q22 alone and 4Q21-3Q22 (i.e. 3Q22 annualized): Clearfield, Alphabet, Microsoft, Amazon, and Harmonic. Three of these are cloud providers which have been steadily improving their penetration of the telco vertical with a range of solutions – digital transformation, service design, 5G core, workload offshift, etc. Clearfield is a small fiber company focused on the booming US market; Harmonic has benefited from strong cable access spending and a growing customer list.

Other companies to show improvement in both periods include YOFC (a Chinese fiber company), Comba Telecom (a Chinese wireless equipment provider), and two large US-based engineering services-focused companies benefiting from the fiber boom (DyCom and MasTec). Calix also saw strong gains in 3Q22, driven by “broadband service providers that are providing broadband as a service rather than just the dumb pipe”.

Most large vendors appear to be cautiously optimistic about the spending outlook in Telco NI. Many point to supply chain constraints as limiting recent growth, but there is an expectation that these will clear up by 2Q or 3Q 2023. However, MTN Consulting expects the market will start to flatten in the next few quarters. Telco capex – the main driver of Telco NI – is likely to end 2022 between $325B and $330B, where it has sat for the last four quarters. Our official forecast for 2022 is $331B. We will be publishing a formal forecast update in the next few weeks. 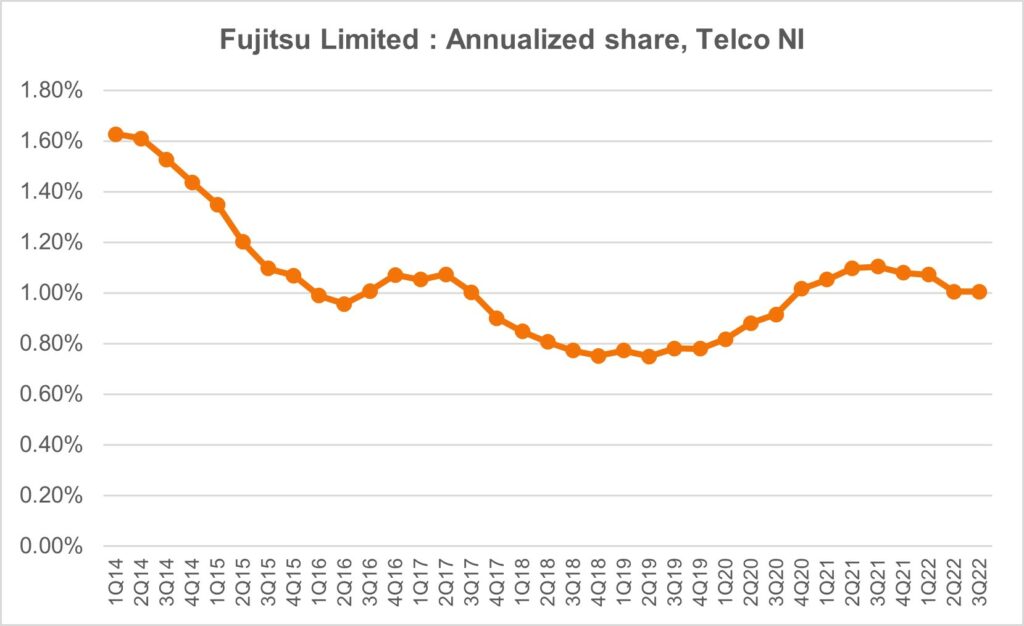 By Matt Walker On December 6, 2022 This brief report addresses the role of the supply chain in telco efforts to reduce their overall measured carbon footprint across Sc... read more

By Arun Menon On October 4, 2022 The US sanctions imposed way back in 2018, and then again in 2020, continue to haunt Huawei. The company was forced to divest some bu... read more

By Matt Walker On December 18, 2021 Global economies have recovered from the worst of last year’s pandemic, but COVID-19 has caused some long-term shifts in market dyn... read more
Subscribe