Telco capex jumps 10% in 2021 to hit $325B
Surprisingly strong bounce back from COVID; spurred by outperformance in China, 5G network scaling, fiber builds, weaker competition on vendor side
By Matt Walker

The year 2021 was an unusual one in telecom. After a COVID-plagued 2020, telcos saw the strongest revenue growth in a decade: full-year 2021 revenues were $1,891 billion (B), up 5.5% from 2020. Capex surged even more, up 10.1% YoY to $325B. The ratio of capex to revenues, or capital intensity, reached 17.2% in 2021, the highest level since 2015. This record makes clear that the jump in capex (and revenues) was not fueled merely by exchange rate fluctuations. Rather, the 2021 network spending surge was due to a few factors: COVID-delayed projects finally getting fulfilled; 5G’s spread into more countries and growth in subscriber counts; 5G core scaling up with a growing number of stand-alone deployments, many leveraging partners from the cloud; and increased fiber deployment in rural areas and for mobile infrastructure connectivity, in some cases supported by government subsidies. The capex climb took place as telcos chose from a smaller set of suppliers than in previous years: the US-sponsored entity list has severely limited opportunities outside China for Huawei, which is still the world’s largest telecom vendor. There has been a small amount of rip and replace activity to cope with vendor bans, but the bigger effect is less competition during the RFP process. This also has the effect of pushing up capex outlays a bit. Excluding China/HK-based companies (which haven’t finished reporting), the top 10 biggest capex spenders in 2021 were AT&T, DT, Verizon, NTT, Comcast, Vodafone, Orange, Charter, America Movil, and Telefonica. The biggest capex gains in 2021 were seen at America Movil (+$2.54B versus 2020 total), Telecom Italia (+$2.49B), Verizon (+$2.09B), AT&T (+$1.93B), Deutsche Telekom (+$1.74B), BT (+$1.63B), and Rakuten ($1.47B). The DT jump is inflated slightly by its Sprint acquisition, which closed in April 2020. Regarding the spending outlook, our latest official forecast calls for $328B in capex in 2022, a bit higher than 2021; we are maintaining this target for now, but there is a high level of uncertainty and considerable downside risk. 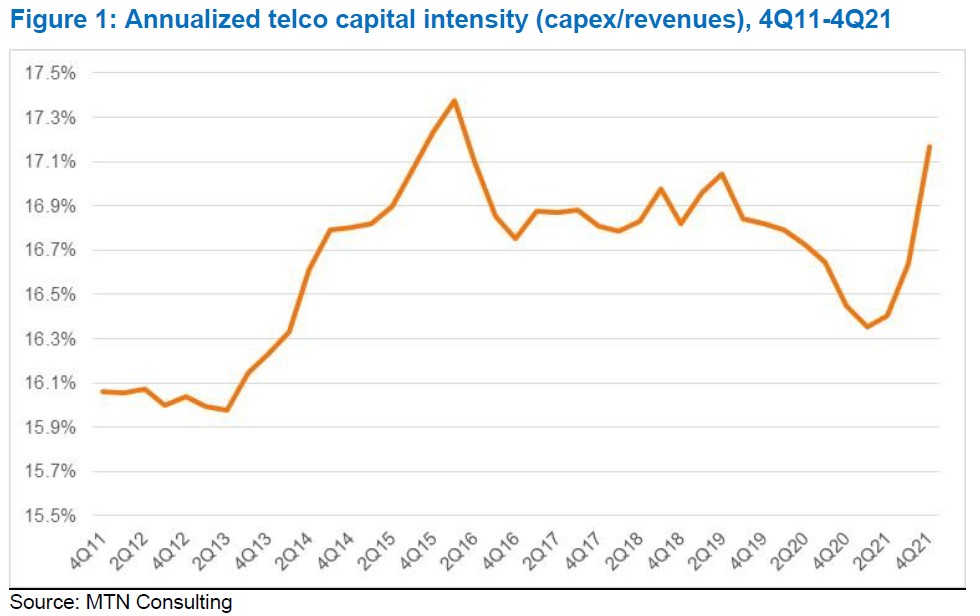 By Matt Walker On December 18, 2021 Global economies have recovered from the worst of last year’s pandemic, but COVID-19 has caused some long-term shifts in market dyn... read more

By Arun Menon On December 17, 2021 This market review provides a comprehensive assessment of the global telecommunications industry based on financial ... read more
Subscribe