Our last network operator spending forecast was published in December 2021. Since then, COVID-19 worries have continued to dissipate. The severity of recent strains is much lower, vaccines have improved and vaccination rates have risen, travel has begun to normalize and business life has resumed in most countries. There are long-term effects from the pandemic. It gave a boost to online activities and enterprises, new businesses were created, and existing ones accelerated growth. It broadened awareness of public health issues. Virtual classes, meetings, and events are now more common, even when COVID is not a factor. Not all news was good, for sure, as the pandemic highlighted the nasty effects of online disinformation and how bad actors can use such things to create divisions in society. Hundreds of thousands, maybe millions, died needlessly due to avoidance of basic precautions like masks and washing your hands. Further, as COVID’s immediate worries have ebbed, most policymakers have been happy to revert to pre-pandemic thinking, rather than investing to prevent the next outbreak. But COVID is no longer a major factor depressing current global economic activity. China’s shutdowns have an impact, but are nothing like those of 1Q20.

While COVID fears have subsided, for now, there are other pressing issues impacting economic activity. Russia invaded Ukraine and is threatening a broader war. China showed a willingness to look the other way, and it continues to take expansionary steps in the South China Sea and beyond. Food and oil prices have risen dramatically, contributing to the worst inflation in decades, for many countries. Interest rates have risen in response, causing stock market valuations to drop. Higher interest rates also make it harder for companies to invest and borrow for growth, which hits network spending, a focus of this forecast. Moreover, semiconductor supply shortages persist, impacting the availability and price of all sorts of goods, including network equipment.

Macroeconomic changes are difficult to incorporate into forecasts of any kind. There is a high level of risk in this current climate. GDP forecasts published by official bodies like the European Commission and the IMF are moving targets, constantly subject to revision; forecasts released by investment banks and ratings agencies are also changing frequently. And these high-level macro forecasts generally don’t really consider geopolitical dislocations: what happens if Putin decides he wants Poland, too? What happens if Xi decides it’s time to force Taiwan into China’s fold? The bottom line is that forecasts, including this one, simply represent current expectations, and assume that nothing too dramatic happens to shift those expectations. All forecasts need to be interpreted with a grain of salt.

This network operator forecast aggregates expectations for three network operator segments: telco, webscale, and carrier-neutral (CNNO). In 2021, these three markets accounted for $4.116 trillion of revenues (+14.9% YoY), $532 billion of capital expenditures (capex)(+15.4% YoY), and 8.91 million employees (+4.4% YoY). Over the last several years, the webscale market has grown rapidly, which accelerated during the COVID-19 pandemic as business shifted online. Webscale growth will drive the market going forward through 2026, as well. For the 2017-21 five-year period, webscale accounted for 26.4% of total capex, but that will rise to 37.2% of total over the next five years. Telcos will still account for the majority of total network operator capex, or 54.4% of capex over the next five years, but that’s down from 67.6% of total in the previous 5 years. For 2026 alone, telco capex will drop slightly below 50% of total. Meanwhile, CNNOs continue to rise in importance from a small base; their capex will rise from 5.8% of total in 2021 to about 8.7% of the 2026 market.

There are hundreds of network operators across the globe, of various types. We cover about 200, across the telco/webscale/CNNO market. A small number of very large players stand out. Focusing on capex over the last three years (2019-21), the largest 13 operators accounted for over 50% of the total; 5 of these are webscalers. The largest 50 operators captured over 80% of capex in the same time period; three of these are carrier-neutral providers (China Tower, Equinix, and Digital Realty), 10 are webscalers (Amazon, Alphabet, Microsoft, Facebook/Meta, Apple, Alibaba, Tencent, Oracle, IBM, and HPE), while the remaining 37 are telcos (from China Mobile, the largest of the group, to LG UPlus, the smallest of the top 50). These large operators not only make the most attractive customer targets for suppliers; they also have the most impact on technology development in networks, through their own R&D, participation in industry bodies, and work with (and purchasing from) vendors.

The three groups of operators we track pursue a range of different business models, even within segments. Webscale revenue models revolve around a diverse mix of advertising, devices, software, cloud services, and ecommerce. Carrier-neutral providers, to simplify, rent network infrastructure to other businesses. Telcos sell subscription and pay-as-you-go services for communications services, including bandwidth, video, mobility, and enterprise services. There is a huge amount of variety in these discrete market segments. What’s more important, though, is that the three segments rely on each other in important ways. Carrier-neutral players get most of their revenues from telcos & webscalers needing to fill gaps in network coverage and accelerate time to market. Telcos rely on CNNOs to lower their cost of operations, and need webscalers to provide services and apps which make their network worth using beyond telephony. Webscalers lack last mile access networks and can only deliver their services to the mass market over telco infrastructure. Webscalers also, despite big capex outlays, can only blanket the globe with data centers by partnering with CNNOs for collocation.

This interdependence will grow. The big cloud providers in the webscale market, for instance, have targeted the telecom vertical and found success; AWS, Azure and GCP combined for about $2.6B in revenues from telcos in 2021. Telcos are making some big bets on cloud technology as they deploy 5G core networks. Both telcos and webscalers want to provide seamless, resilient network coverage, including at the edge, and can’t build it all themselves. As a result, they’ll need to scale up their partnerships with carrier-neutral players like Equinix and American Tower/CoreSite. CNNOs are increasingly taking over the “dumb pipe” aspects of the network, and to be competitive and upsell they will integrate assets across fiber, cell tower and data center.

This report includes detailed breakouts for each of the three network operator types. Here is a summary of some of the key findings, by segment:

Telcos: from $1.888 trillion in 2021, revenues will grow at an average annual growth rate (CAGR) of 1.3% to just over $2 trillion in 2026. Capex will stay above $330B for the next three years but decline after that, hitting about $326B in 2026 (the same figure as 2021). Global telco capital intensity saw its annual peak in 2021, at 17.3%, the same figure as 2015 at the height of 4G builds; it will fall to 16.2% by 2026. Software will grow as a percent of total capex, but at a slower rate than we anticipated in previous forecasts; it will hit 20% of total in 2026. Network operations opex will grow an average of 4% per year through 2026, reaching $329B in 2026, around the same amount as spent on capex. Telcos will continue to reduce headcount by revamping processes, investing in digital transformation and adopting automation; total employees will be about 4.32 million in 2026, from 4.73M in 2021. Spending on employees (labor costs), however, will continue to rise on a per-person basis, reaching just above US$70K by 2026, from about US$58K in 2021. Regionally, the Americas region will maintain its share of global capex at around 32%, Asia will rise a bit to 41% by 2026, Europe will fall a couple of percentage points, and MEA will gain slightly. There are year-by-year variations and country differences underlying these regional trends.

CNNOs: while a much smaller market than the other two, CNNO revenues will grow fastest of the three, reaching $158 billion by 2026, from $89B in 2021. Some of this is organic growth, especially in the data center market; new buildouts are happening worldwide, some driven by private equity and other asset management funds. M&A will continue to be a big factor in this sector’s growth, as telcos spin out assets, both towers and data centers, and established CNNOs acquire assets developed initially by private players. CNNOs’ capital intensity will rise a bit over the next three years due to data center investments, dropping back to 36% by 2026, a bit higher than 2021’s 35% result. CNNOs’ total headcount will be about 152K in 2026, from 102K in 2021. Data centers owned and operated by CNNOs are likely to hit 1,760 by 2026 (2021: 1,062); towers, 4.08M (2021: 3.16M); and, fiber route miles totaling 1.07 million (2021: 792K).

Contrasting this current forecast with that published in December 2021, the biggest numeric changes include: weaker revenue growth outlook in telecom, especially in Europe over the next two years; slightly faster headcount reduction in telecom; slower revenue growth in webscale for the next two years, but faster following this period; higher overall level of tech investment in webscale (both capex and R&D spend). 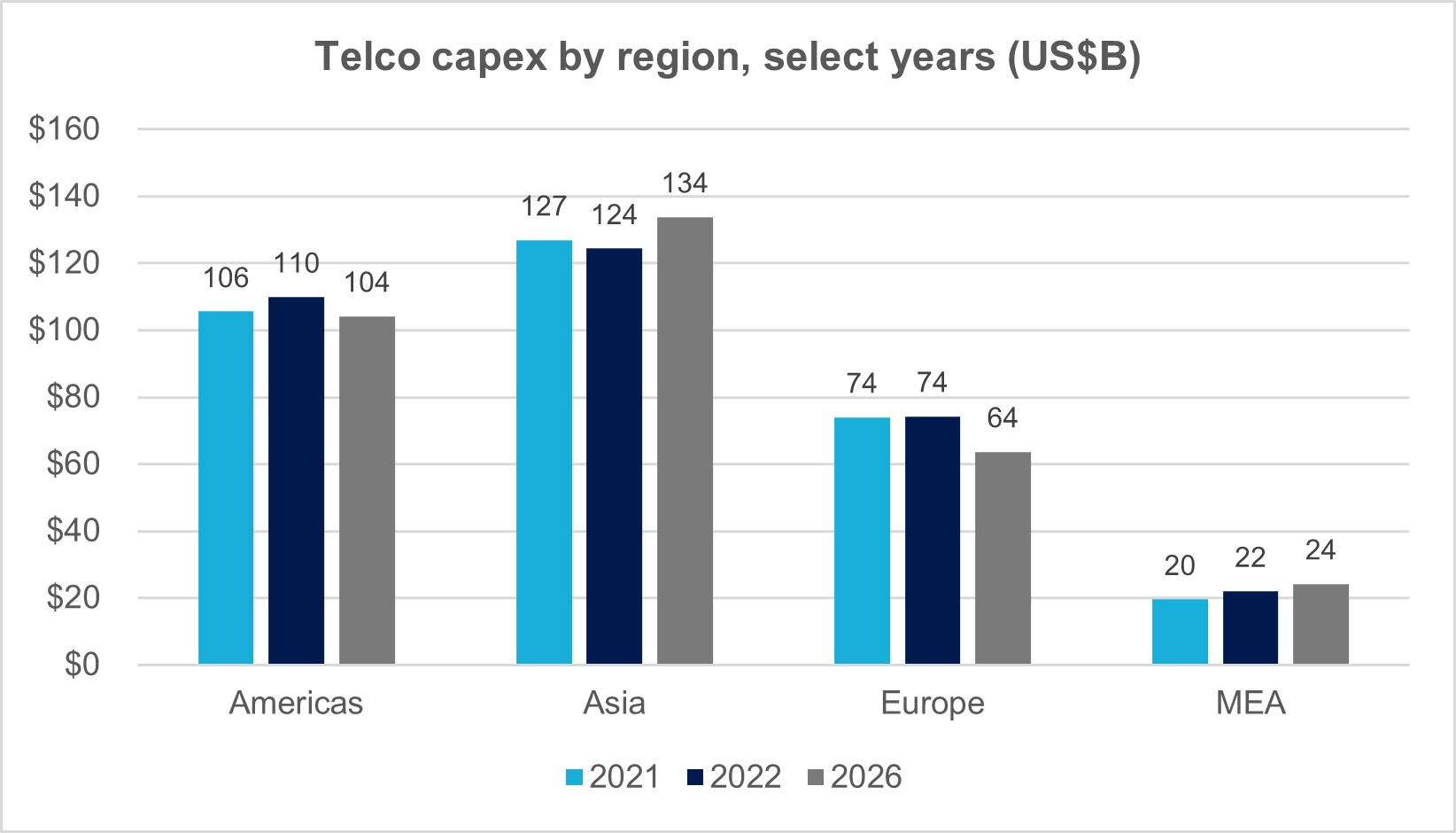 By Matt Walker On May 31, 2022 This report reviews the growth and development of the webscale network operator (WNO) market. On an annualized (12 month) basis throu... read more

By Arun Menon On April 8, 2022 This market review provides a comprehensive assessment of the global telecommunications industry based on financial results through D... read more
Subscribe