Network Spending Profile: Etisalat
Etisalat spent $1.7B on capex and $1.2B on network operations opex in 2020 to support its 154 million subscribers; capital intensity to rise in 2021
By Matt Walker

The Emirates Telecommunications Group, better known as Etisalat, is the UAE’s largest telco group and the second largest in the MEA region. In 2020 Etisalat reported annual revenues of $14.1 billion, capex of $1.7B (12.0% capital intensity), $1.2B in network operations opex (19% of total opex, excluding depreciation & amortization), and approximately 38K employees. As of March 2021, it had 156 million combined subscribers of fixed, broadband, and mobile services across its markets, concentrated in the UAE, Egypt, Kingdom of Saudi Arabia (KSA), Morocco, and Pakistan.

Etisalat’s UAE HQ has among the best fiber networks in the world. The company has made development of ultra (fixed) broadband and complementary content/media services a priority. Over 70% of Etisalat’s total fixed revenues come from the UAE, and fixed revenues in the UAE exceeded mobile in 2020. Mobile dominates elsewhere.

Etisalat’s strategy is “driving the digital future to empower societies”, which guides it as it “transitions from a traditional telecom operator to an integrated ICT/digital solution provider.” One of four strategic goals centers on technology: to “transform into an agile, digital and efficient organization.” As part of this, Etisalat has embraced the cloud, investing heavily in its own “SAHAB” telco cloud with help from vendor partners and Microsoft Azure. The company aims to leverage “advancements in network virtualization and the adoption of cloud on the path toward programmable and software-driven networks and associated operations”. It expects that its transition to hybrid cloud will enable it to deploy digital platforms in new areas like AI, analytics, automation and blockchain.

Etisalat’s capex has averaged $2B over the last four years, roughly 5% of which is software. The company spends 18-19% of opex on network operations, and an estimated 5-6% on utilities costs (higher in north Africa). Etisalat’s reported spend on tower/fiber leasing is small, but the ratio is far higher for its Mobily associate in Saudi Arabia. In the KSA, Etisalat is developing a wholesale tower sharing company with Zain KSA. In concert with wider deployment of 5G, Etisalat expects its capital intensity to spike to 16-18% in 2021, from several percentage points lower in 2020.

Ericsson, Huawei and Nokia are key suppliers to Etisalat, and all involved in the telco’s 5G buildout in the UAE. The vendors are sometimes engaged on a multi-year, managed services basis. Other important suppliers include Cisco, as well as Ciena, CSG, IBM/Red Hat, Juniper, and NEC/Netcracker. Etisalat’s most important single contract in the last few years is its March 2018 telco cloud project, SAHAB, supplied by Red Hat, Juniper, and Netcracker, with systems integration provided by NEC.

Etisalat started to embrace open RAN in early 2020. In the first few months of 2021, Etisalat has deployed Parallel Wireless in Afghanistan and signed on with the Rakuten Communication Platform (RCP). 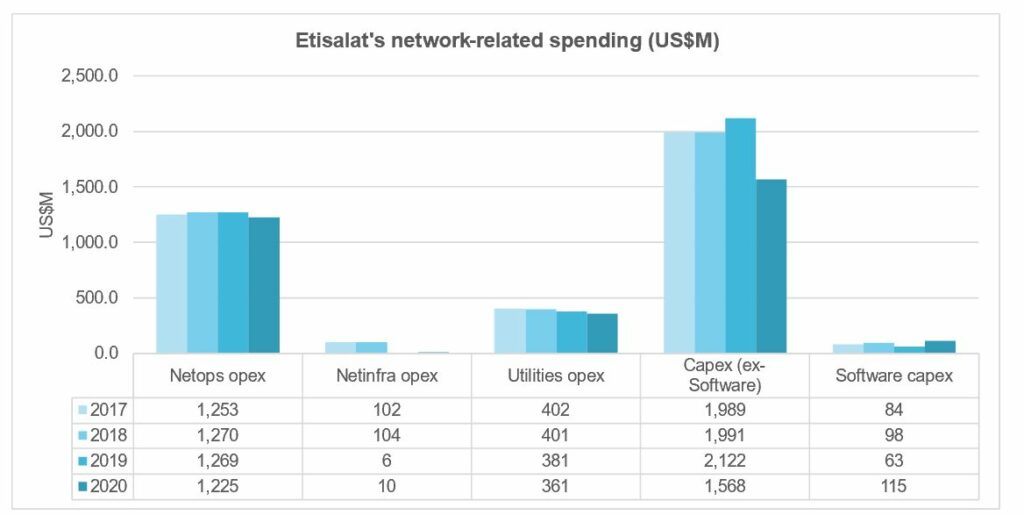 By Matt Walker On March 30, 2021 The global telecom industry bounced back in 4Q20 with 3.4% and 1.2% YoY growth in revenues and capex, respectively. Revenues for CY20... read more
Subscribe