The market for telecom network infrastructure (telco NI) vendor products and services declined by a relatively modest 0.6% in 2020, surprisingly, despite widespread economic downturns related to the COVID-19 pandemic. Telco investments to support this shift, and a broader move to the cloud, helped to offset the weak economic climate, as did telcos’ eagerness to deploy 5G and begin the search for new revenue streams.

For all reporting vendors, telco NI revenues in 2020 amounted to $216.4B, from $217.7B in 2019. For 4Q20 alone, telco NI vendor revenues saw 4% YoY growth to $61.2B on the back of a widespread pickup in 5G spending, driven by a year-long surge in China. Huawei, Ericsson and Nokia took the top three spots for the year, as usual, followed by ZTE, China Comservice and Cisco. The biggest share gainers in 2020 were Ericsson, ZTE, Intel, NEC and Dell Technologies/VMWare. Samsung, Nokia, China Comservice and several fiber-centric suppliers lost the most share in 2020.

Telco capex and opex both slightly down in 2020

Capital expenditures by telcos ended 2020 at approximately $293.4B, down about 2.0% from the 2019 total. China was up, but a large number of telcos in the Americas and Europe reported capex declines. Telco opex, excluding depreciation and amortization, fell by 3.6% in 2020 to $1,173B. Much of the decline was in the sales & marketing and G&A areas, however, as telcos adjusted to working from home and accelerated the migration of sales & support to digital platforms. Numerous telcos are reporting that network operations is taking up a larger portion of the opex pie. This is important because vendors are increasingly selling into opex budgets within their telco customers, not just capex budgets. That’s especially true on the services and software sides. Webscale providers’ sales of software licenses to telcos are also growing, and starting to bump up competitively against the more traditional telco-centric vendors like Amdocs and CSG.

For 4Q20 alone, telco capex and opex (ex-D&A) both increased on a YoY basis, up 1.0% and 0.2% respectively. A number of carriers did front-load capex more than usual in 2020, including AT&T and Verizon, but the capex split by quarter was in line with historic periods. As such, the end of year surge is mildly promising, as it suggests 5G network deployments are back on track.

Note that the capex and opex figures for the telco market in 4Q20 are preliminary; final results will be published shortly.

In terms of overall share gains in 2020, the biggest winner was Ericsson, as it gained 0.73% from its 2019 base to extend its lead over third place Nokia. Huawei’s fortunes in 2020 were hampered significantly by supply chain sanctions and security concerns, giving both vendors an opening. In such cases, Ericsson and Nokia often shared 5G wins (e.g. dtac in Thailand), as exclusive deals are not common, but Ericsson tended to win more of the business on a revenue basis. And Ericsson’s strong presence in China also lifted its overall position.

The biggest losers of 2020 were Samsung and Nokia, dropping 0.55% and 0.54% in market share respectively, relative to their 2019 positions. Samsung’s decline is due mainly to the completion of initial 5G builds in Korea. The company has a number of recent 5G wins elsewhere, however: KDDI and NTT DoCoMo (1Q21), as well as SaskTel and Videotron in Canada and a big deal at Verizon announced late last year. Revenues for these deals haven’t hit yet, however. Meanwhile, Nokia’s move away from China impacted revenues, but it has also partnered with all the big cloud providers in 1Q21, and its support of open RAN differentiates it from Ericsson – these efforts should pay off for Nokia in the future.

ZTE: its share gain in 2020 of 0.54% was only slightly less than Ericsson. The company does not face the same supply chain bottlenecks as Huawei, and it is even more exposed to the China market than Huawei – as such, China’s big 5G buildout helped the vendor substantially. However, the company has not made headway in overseas 5G markets yet, and its fixed broadband and optical portfolio has not been particularly successful recently.

Intel: years of R&D aimed at not just selling into telco networks but selling directly to telcos has paid off for Intel, as it grew share by 0.45% in 2020. The company has faced some challenges recently around foundry production and the competitiveness of its leading edge chips, but in the telco space it is looking up: it launched a 3rd gen Xeon processor recently, optimized for 5G workloads; partnered with GCP on Anthos; and is working with Samsung on 5G SA core technology.

NEC’s share gain of 0.41% in 2020 was the fourth largest improvement in the market, due to scaling up of Japanese 5G network deployments after COVID as well as NEC pushing harder on Europe (e.g. working with Telefonica on open RAN).

Dell Tech/VMWare gained 0.25% market share in 2020, as VMWare’s telco cloud positioning has been paying off. The company has been steadily rising in share to the telco segment, from a rank of 49 in 4Q16 to break into the top 25 in 2020, ending the year at 21. That puts it on par with Fujitsu and Accenture, and slightly ahead of Ciena and Juniper

Amdocs gained a bit of share in 2020, and remains a powerhouse in the IT service provider company segment, with $4.2B in 2020 revenues, well ahead of 2nd ranked (in this segment) IBM. Amdocs is diversifying revenue sources, integrating an important acquisition (Openet), and partnering with webscale providers (AWS, November 2020)

Prysmian, Corning, and FiberHome all lost share in 2020 due to telcos shifting away from new fiber deployments as capex focused on 5G construction. Fiber spending was especially weak early in 2020 as COVID-19 spread and companies struggled to cope.

CommScope’s single quarter share in 4Q19 (post ARRIS acquisition) was 3.21% of the global telco NI market, but this dropped to 2.82% in 4Q20. The company is heavily exposed to a small number of customers with its home networks division (CPE), which is masking its overall healthy product mix. The new CEO is engaged in a strategy review right now which should see some change in 2H21.

Many of the largest webscale providers operate cloud services (e.g. AWS, Azure, and GCP), serving a wide range of vertical markets. Over the last 3 years, the telco sector has become an increasingly important vertical market for webscale services. This telco-webscale collaboration activity picked up in 2020. Webscale operators help telcos with service and application development, shifting of workloads, and developing, enabling and marketing cloud-based services. Managing costs is a central purpose of telcos’ willingness to partner with webscale providers. Also, with the emergence of 5G, webscale operators are developing a range of edge compute services aimed at facilitating 5G rollouts and service deployment.

Collaborations can involve delivery of a portfolio of 5G edge computing solutions that leverage the telco’s 5G network and the webscale operator’s global cloud coverage, as well as its expertise in areas like Kubernetes, AI/ML, and data analytics. At the same time, more traditional suppliers to telcos (e.g. Nokia) have expanded their own collaboration with the cloud providers who dominate the webscale market. These deals aim to differentiate among traditional telco vendors, prevent webscalers growing too fast in the market, and save costs for telcos. We expect telco-webscale collaboration to become increasingly important to how telcos deploy and manage their networks over time.

Outlook: Telco NI vendors have an opportunity for growth in 2021

In 2021, telco capex is likely to grow 4%, offsetting the decline of 2020. The software component of capex will rise slightly to just under 20%, as software-based features and network automation solutions are more widely deployed. Mobile operators’ 5G rollout plans will get back on track as more spectrum auctions complete and supply chains settle. Bandwidth growth remains strong and will benefit transmission vendors. Fiber buildouts to cell sites and small cell spots will kick up again. Telcos will need help on the services & systems integration side as they step into Open RAN architectures. They’ll also need outside help reaping the benefits of cloud collaborations with the webscale sector. Network operations opex budgets will be a more compelling opportunity for vendors, as telcos layoff more of their own staff and look for efficiencies; software licensing fees also can come from Netops budgets.

Vendors with a telco focus are used to coping with tight budgets, and helping their customers with mundane tasks like lowering their cost of operations. In 2020, COVID-19 and a slowdown in 5G deployment were disappointing to vendors, but far from catastrophic. There is hope in 2021. 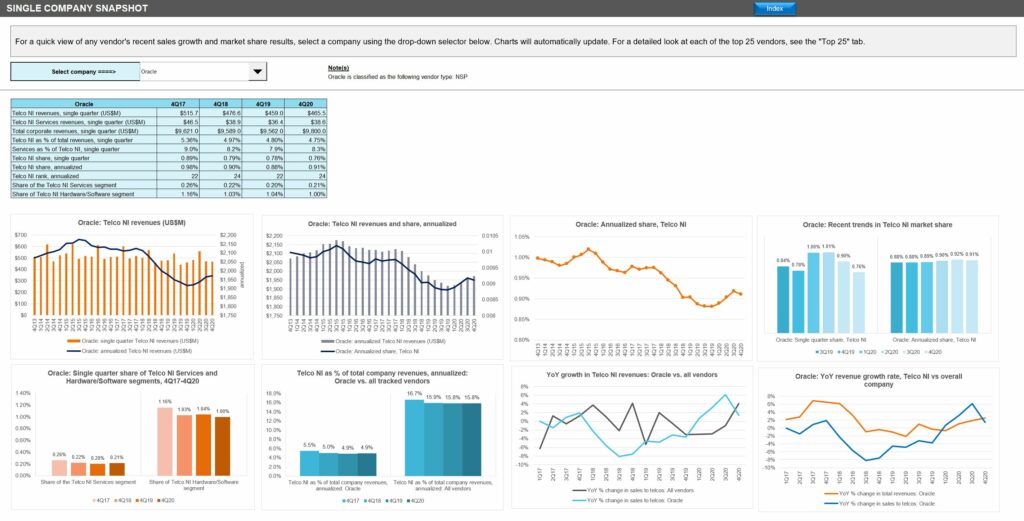 By Matt Walker On December 30, 2020 Revenue growth for telco, webscale and carrier-neutral sector will average 1, 10, and 7% through 2025
Subscribe