Telco software capex on the rise

Telco software capex on the rise
Telcos’ capital expenditure on software was $50 billion in 2019, and trending upwards; COVID-19 layoffs will create vendor opportunities
By Matt Walker

Software is central to telco efforts to compete

Over the last two decades, software has become the key ingredient to delivering value in networks. That has accelerated in the last five years with the rise of webscale networks, and the ongoing profitability challenge facing telecommunications network operators (telcos). Sources of telco software spending include:

Vendors, who have invested heavily in software-defined networking and network functions virtualization. A broad range of hardware products are now engineered to provide functions, features and capacity through software. That change has many benefits: it allows a pay as you grow approach to investment, lowers maintenance and installation costs, simplifies customer management, and enables new service offerings.

Telco employees, through internal software development. Building your own software is a challenge for all but the largest few companies with access to the right talent pools, however. Most smaller telcos would prefer to rely on vendors when possible, benefiting from their scale.

Webscale operators, as telcos are spending more on cloud-based software solutions, including software-as-a-service (SaaS) and similar offerings from the webscale sector. These transactions are evolving into large multi-year arrangements where a telco effectively outsources key network functions to cloud providers. Telcos’ growing interest in mobile edge computing (MEC) to complement 5G is driving some of this partnership activity.

In 2019, software investments represented 16.8% of telco capital expenditures (capex), from 11.7% in 2015. This upwards trend coincides with telcos’ increased adoption of SDN/NFV, and preparatory work for 5G deployment. SDN/NFV and 5G will continue to drive up telco software spending over time.

Some large telcos, such as DT, are ramping up their internal software spend relative to software purchased from third parties. While in theory that may enable differentiation and faster time to market, it will be difficult to sustain in the current economic climate. As telco layoffs begin to ramp in the face of the COVID-19 crisis, telcos will turn to vendors and webscale operators to fill the gaps. Potential beneficiaries of this change include webscale operators like Microsoft and a long list of vendors, including Accenture, Amdocs, Infosys, Oracle, TCS, Tech Mahindra, and Wipro.

Figure 4: Purchased software as a percentage of total software capex 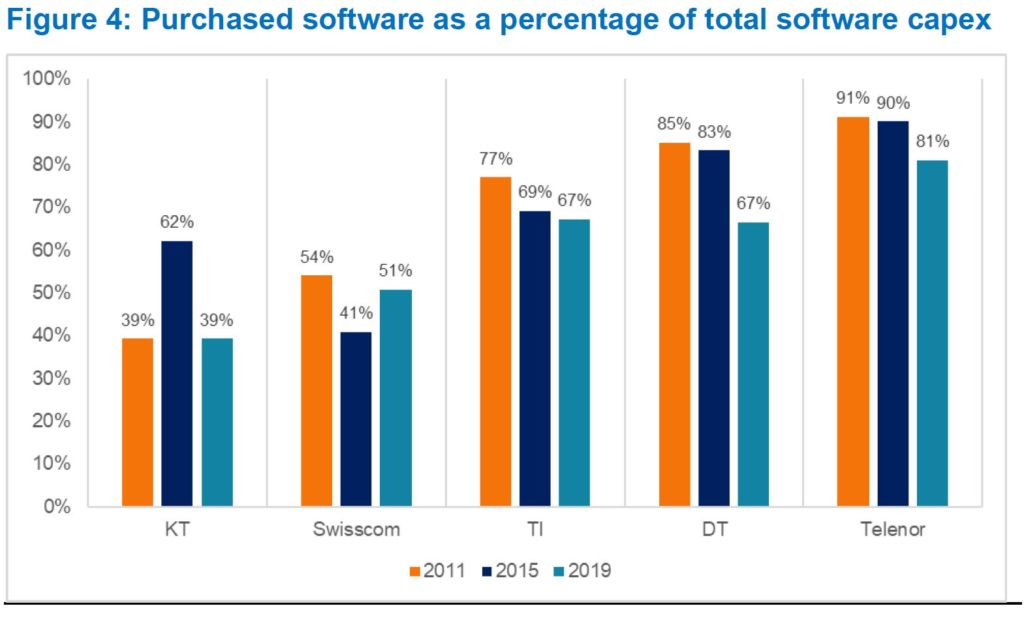