First half 2021 (1H21) telco capex grew nearly 10% YoY, and vendors’ sales revenues into the telco vertical were up by over 7% in the same timeframe. It’s too early to say much about capex, as very few telcos have reported. However, a number of significant suppliers to the telco sector have now published 3Q21 earnings. Based on 14 early reports, vendor revenues in the telecom network infrastructure market (telco NI) are positive: growth for the group averaged 9% YoY.

Two of the largest early reporters, Ericsson and Nokia, had lackluster results, with revenues flat for Ericsson and up just 2% for Nokia. Further, NEC’s telco NI revenues are down an estimated 5% YoY. However, a number of other significant players are doing well. That group is led by Samsung and ZTE, both important to the mobile RAN market, which grew 63% and 22% YoY, respectively. Webscalers with tailored offerings for the telco sector – Microsoft, Alphabet, and Amazon – continue to improve their penetration in the sector. Microsoft easily has the strongest YoY growth to date, due in part to its 2020 acquisitions of Affirmed Networks and Metaswitch. Microsoft is now the biggest of the three in terms of telco NI revenues, passing Amazon’s AWS for the first time.

This short report provides a snapshot of early vendor reports for 3Q21 and the trends apparent in the results. 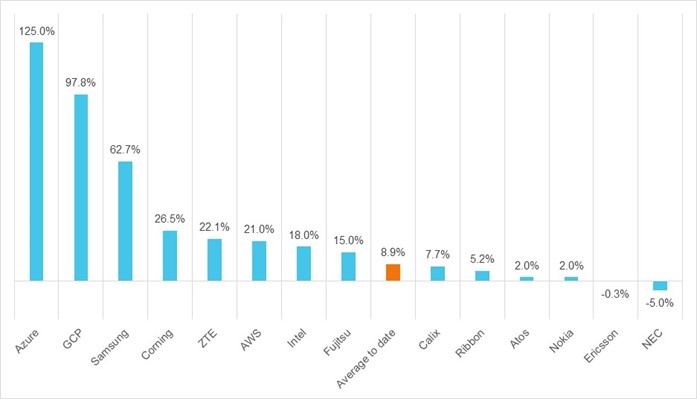