This report is the first in MTN Consulting’s series of country-level network studies, focused on Egypt. The objective of this report is to assess Egypt’s telecommunications market, addressing:

Future deep dives in the series will focus on South Africa, Nigeria and the UAE; China, India, Korea, Japan, and Taiwan, the US, Canada, Mexico, and Brazil; and the UK, France, Germany and Russia.

Egypt’s government has liberalized its control of the sector cautiously over the years. The government retains an 80% stake in Telecom Egypt, 13 years after its IPO. TE remains the largest of Egypt’s four operator groups, followed by local units of Vodafone (UK), Orange (France), and Etisalat (UAE). All have 4G licenses now, but TE dominates fixed markets. The four accounted for a $870M in capex for the 3Q17-2Q18 period, a figure likely to rise significantly over the next 2-3 years due to the scaling of LTE and FTTC-based DSL.

Egypt boasts a number of opportunities for vendors of network infrastructure and related software and services:

China has raised its profile in Egypt considerably in recent years, partly through projects under the One Belt One Road program. The biggest of these is Egypt’s new capital, 45km east of Cairo. Chinese banks have committed several billion in financing. The terms generally require the use of Chinese technology. This has implications for the vendor mix in network infrastructure, as well. Huawei has already won contracts in the new capital, and ZTE is back in business in Egypt. Success in the new capital could help these vendors’ elsewhere in Egypt, at a minimum with incumbent Telecom Egypt. 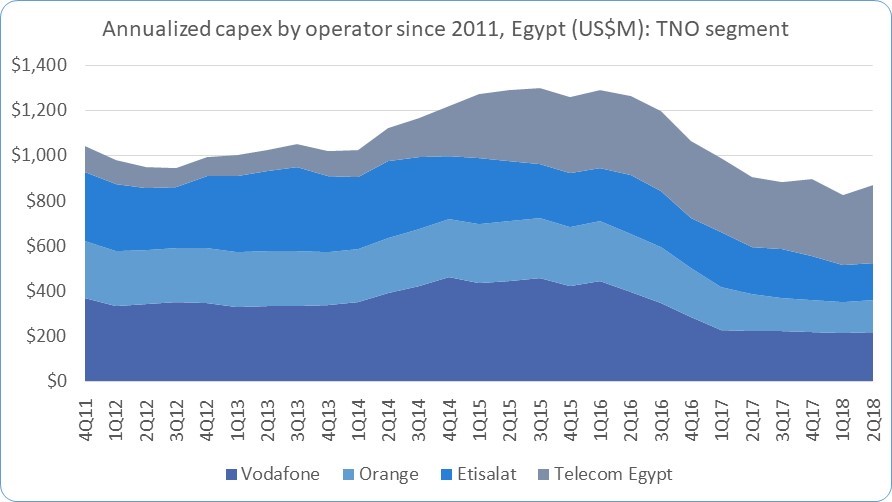